For starters, as some speculated (and then perhaps surmised, after seeing TVLine’s sneak peek), Fitz and Simmons had not both eluded being swapped out with an LMD. Rather, the four that had been detected included Fitz. Jemma came to realize this after the two of them slipped away from Creepy Coulson & Co. to do some work, only to wind up in a duel of sorts, with Fitz staring down the barrel of Simmons’ gun. Was Jemma in fact confronting a fake? Or had she been swapped out, and was looking to “assimilate” her love?

That face-off led to the hour’s first OMG moment, as Fitz “proved” that he was the real deal by slicing his wrist — only to put the brakes on his cries of anguish to coolly flip the blade in the air, grab it, and then plunge it into Jemma’s leg. (FitzSimmon fans, I hope you had handy all of the wine as this played out. Especially when the topic of marriage came up for the first time, under perhaps the worst possible circumstances.)

But if Fitz is an LMD, who among the four seemingly flagged by the scanner wasn’t? Turns out that Daisy came back scot-free, and was the other agent targeted to be “turned.” But as Daisy went about prepping for the intake of Inhumans, she stumbled upon a containment pod filled to the gills with LMDs of herself — a “Daisy fleet” as Coulson would later dub them. With LMD Mack on her tail, Daisy hid successfully among her doppelgangers, eventually getting the drop on him with her quake powers. 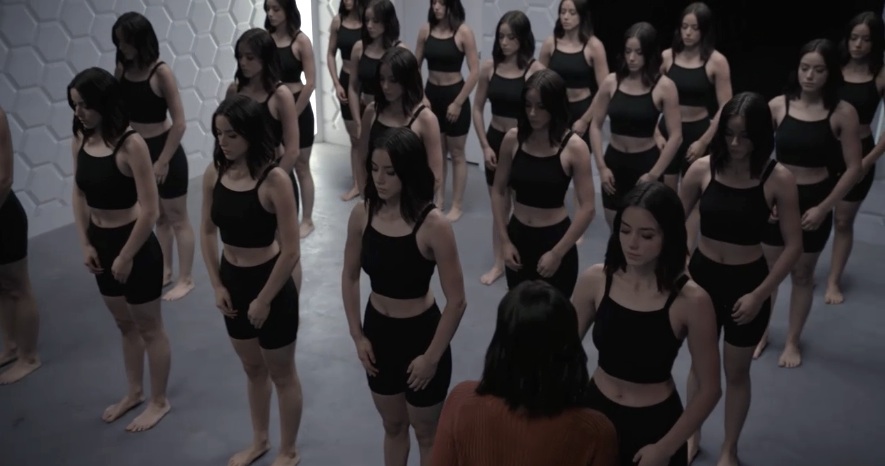 Daisy then ran into Jemma, setting the stage for another nerve-wracking round of, “I’m not an LMD — are you?” But Daisy put that mystery to rest by forcing Jemma into a hug accompanied by a gentle quake — thus proving that she is a legit Inhuman, and Simmons has bona fide bones inside her. Jemma then fretted about their chances of eluding a base full of agents led to believe that they are the enemy, and then somehow finding and hacking into the Framework to save their friends. But Daisy assured Jemma that FitzSimmons is end game, and as such, “This is not how your story ends.”

In a brilliant move, Daisy doused the base with a gas that briefly KO’d all the humans, leaving just LMDs standing. While Jemma went around reviving the human agents (and trying to convince them of the true situation), Daisy got into an epic tussle with LMD Mace, one that took two days to film (per IGN). After besting the Director with a sick move — briefly levitating his body, then slamming it down while she impaled his dorsal circuity — Daisy was surrounded by Mack and Coulson. But she had another neat trick up her sleeves, whipping up a quakeball which she used to blast them away, utterly shattering LMD Mack’s face. LMD Coulson, though, survived his trip through a plate glass window.

Daisy and Jemma would face one final hurdle on their way off the base — LMD May guarding the exit to the Zephyr, and ready to blow the place sky high. Luckily, the ladies were apparently able to appeal to LMD May’s shred of human sensibility, which LMD Coulson realized when she summoned him, and then hit the trigger on the explosives, while Daisy, Jemma and some agents jetted away.

Now safe, Jemma and Daisy proceeded with their bold, risky plan to hack themselves into the Framework, inhabit their avatar selves and hopefully “wake” Coulson and the others, before their bodies shut down. As Yo-Yo flipped the switch, Daisy awoke in a bathtub, in the apartment she shares with boyfriend Grant Ward (!), while Jemma… is six feet under in the Framework?!

As for the others, Coulson is teaching (anti-Inhuman rhetoric?), Mack has reunited with his daughter, Fitz is a rich tech titan (but what lovely lady is he helping out of the limo?), and May is happily working… in the intact Hydra Triskelion?!

As for Aida amid all of this insanity: She solved her problem of “conflicting protocols” by forcing Radcliffe into the “Everything Is Awesome” Framework, before he might ever have regrets about their work. She then outfitted Anton Ivanov with a new, mechanical body that is controlled remotely by his severed head/mind, so that she can have a man on the ground — presumably to chase after S.H.I.E.L.D. in the season’s third and final arc.

What did you think of the episode “Self Control”?