Timeless dropped a mother of a twist during Monday night’s finale when Lucy’s mom, Carol (played by Susanna Thompson), revealed to her daughter that she’s a member of Rittenhouse. That makes Lucy something akin to Rittenhouse royalty, coming from two of the mysterious organization’s strongest bloodlines.

“Rittenhouse has an operative on the mothership” — that would be Emma, who’s a mole! — “and soon they will control everything: the past and the present, the future,” Carol informed Lucy. “Together, we will change history.”

Elsewhere in the season ender: Lucy enlisted her grandfather to be a double agent within Rittenhouse in 1954. Back in the present, they tracked down his apartment full of intel, allowing them to arrest key members. Then Lucy arranged a secret meeting with Flynn to hand over the names of his family’s killers, and he, in return, gave her back her journal, which he claimed she gave him. (More on the when and how of that below.) But the peace was short-lived as Agent Christopher swooped in to arrest Flynn.

And last, but definitely not least interesting: Jiya had a strange physical reaction after taking a ride with the trio in the time ship, which was built for just three. 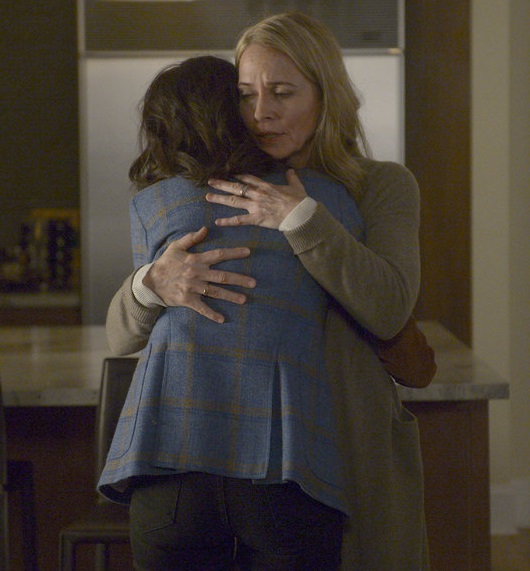 TVLINE | That was one twist where I was like, “I should’ve seen this coming,” because you don’t cast Susanna Thompson on a genre show and not have her be some kind of Machiavellian orchestrator.
ERIC KRIPKE | [Laughs] It’s funny. After we cast her, my son binges Arrow. I was familiar with Susanna and a fan, but I hadn’t watched every episode of Arrow, I have to admit. So I’m in the kitchen watching the episode of Arrow where she’s revealed to be evil, and I was like, “Oh, s–t!” [Laughs] I was like, “She’s going to be typecast as a loving mom, who turns out to be bad.” But Shawn’s right. We had this planned for quite a long time.

TVLINE | Lucy’s father has been quite overt about his involvement in Rittenhouse. Why was her mom so secretive about it all?
KRIPKE | I don’t want to spoil too much, because a lot of these are questions that we’re talking about for Season 2, but I’ll just say that nothing is arbitrary, and nothing is accidental, and Rittenhouse really meticulously plans everything out. In our minds, as we’ve been kicking around the structure of Rittenhouse, Lucy’s mom pretty far outranks Ben Cahill. So it all comes down to Ben revealed himself, and Carol didn’t because that was exactly the way Carol wanted it for reasons that’ll be illuminated in Season 2.

TVLINE | Is there anything you can say about her hopes for Lucy when it comes to Rittenhouse?
KRIPKE | There were times where Lucy didn’t want to be a historian at all, and mom made sure that she was. Mom has been pulling the strings on Lucy’s life for a very long time. At first, we thought it was just a typical, overbearing mother. Now we realize that there was a very meticulous plan in place. Mom’s plan for Lucy is to be the primary team member to take back the mothership in Rittenhouse’s name and make specific and surgical changes to history to make the present far more advantageous for that organization. So she’s their great white hope, and she’s been, unbeknownst to her, meticulously conditioned to be that person. So it’s just another variation on what we’ve been talking about all year, which is: Do you follow this plan that’s been set out for you? And if not, then what do you do, and how do you fight back against it?

TVLINE | Lucy has been chosen for this role. Was Wyatt and Rufus’ involvement in all of this arbitrary, or was there some sort of operation behind them being chosen for this project?
RYAN | You’re going deep dive on us here! Some of these things may be for Season 2. Rufus was literally the only person that could drive or pilot the lifeboat, so I don’t think there was much option about Rufus’ involvement. And one of the great things we’ve been able to play over the course of this season is the reality of sending a person of color back to all these different time periods. I don’t think Rufus would’ve been the logical first choice to blend into all these places that were primarily Caucasian. He was a team member out of necessity, and Wyatt was just chosen from Special Forces by Agent Christopher and her team. 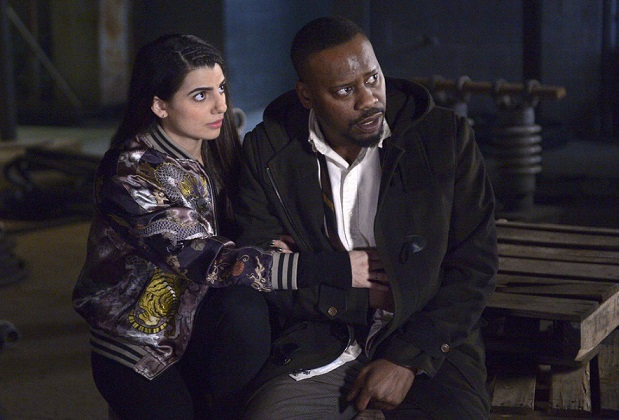 TVLINE | Turning to Jiya, she seems to be neither here nor there. I feel like she’s maybe in two places at once. What’s going on with her?
KRIPKE | There’s something very mysterious happening to her. She was affected by being the fourth person in the machine, and what she ends up seeing is this flickering between the Golden Gate Bridge present day and then the year when it was being constructed. What does that mean, and what is happening to her, and what is she able to see, and how does that grow and change in Season 2 becomes part of the story. The only mild spoiler that I’ll say about it is one of my all-time favorite books is Slaughterhouse-Five, [which is] about a man who becomes unstuck in time, and that was part of the inspiration for what is starting to happen to Jiya. 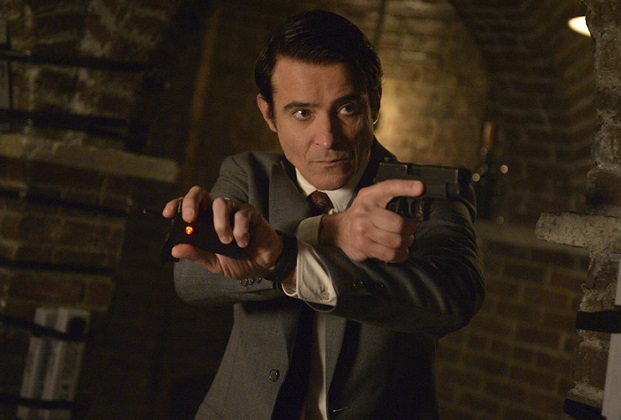 TVLINE | With Flynn feeling betrayed by Lucy after his arrest, what would a hypothetical Season 2 look like in terms of him and the time team? Would they be on opposing sides again, fighting each other?
KRIPKE | The reason we ended Flynn in that position was because we wanted to just continue and deepen and escalate the same relationships we had been playing and just take them to a whole new level. Flynn, when we find him in Season 2, I don’t know 100 percent yet, but you can probably bet that he’s going to be in some kind of incarceration, and he’s going to be really f–king pissed at Lucy. And yet, he is going to be one of the few people suited to being able to fight whatever threats they face in Season 2. So it’ll be uneasy and uncertain.

TVLINE | Flynn says to Lucy about how he got the journal from her, “You age well.” So he’s been to the future?
RYAN | I would argue that that comment does not mean that he’s been in the future. It could mean that a future Lucy has been to the past.
KRIPKE | Perhaps in some version of an advanced machine that does allow you to travel on your own timeline… There’s nothing saying that there can’t be innovation in the future that allows that to happen.

Timeless fans, what did you think of the season ender? Grade it via the poll below, then hit the comments to back up your pick!