CBS’ NCIS: Los Angeles concluded its long-running mole storyline on Sunday night, but not before raising the curtain on another snitch, letting one shady sort slip away and seemingly setting the stage for a cast member’s sad swan song.

When last we tuned in, “Sullivan” aka CIA Officer Ferris had taken Kensi hostage, drugging her and wheeling her off to the basement of a church in Koreatown. Determined to exact “payback” for his lost leg, he revved up an electric saw, but Kensi bought herself a bit of time by using Ferris’ feelings for her against him. After Eric gets a lead on Kensi’s whereabouts, Callen for some reason (to “buy time,” but still!) phones Ferris to announce that they are en route. Ferris drugs Kensi and throws a hood over her, preparing to wheel her off to somewhere else. By the time Sam, Callen and a hot-headed Deeks arrive, the find someone bound and hooded in the basement — but it’s Joelle, Callen’s ex. She claims that she herself got accosted and drugged, and had just come to there, strapped to the chair.

Back at HQ, Hetty and then a boiling-over, punch-happy Deeks take turns trying to get intel out of CIA Officer Vostanik Sabatino, but he A) insists he has none, and B) maintains that he was working for NCIS’ interests and against Ferris and the other “bad apples.” Sabatino offers to help NCIS draw out Ferris (to which Callen says a firm, “No thank you”), and then warns the team that Ferris is a very bad egg, not someone who joined the Agency “for love of country.” Sabatino also echoes that had NCIS never gone to Afghanistan and in doing so unwittingly cost the spooks money, this never would have been an issue.

Meanwhile, Sam assures Deeks that Kensi is “tough as nails” and will make this “bastard” pay, but Deeks is still wired enough to rip Hetty, saying that since she sent Kensi to Afghanistan in the first place, “If anything happens to her, that’s on you.”

Amidst all of this, Admiral A.J. Chegwidden (of JAG) arrives, giving Eric a brief scare. Having heard the team is up to their “ass in alligators,” he came to help Hetty and her team fix things. Hetty meanwhile checks in on Joelle, 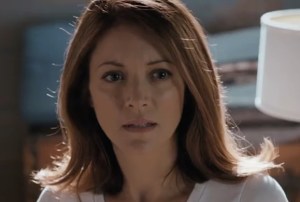 who says she is feeling a bit better after the day’s events. Hetty remarks that is surprising, seeing as Joelle — aka CIA Officer Taylor — lost three of her colleagues today. Found out, Joelle explains that she was originally assigned to keep an eye on Callen, until the op changed and she got dragged into it. Pressed by Hetty, Joelle (unconvincingly) whips out a gun, only to get KO’d by an oar-wielding Admiral Chegwidden.

Now being held at a house in Studio City, Kensi begins violently choking on blood (having bitten down on her own tongue), leading Ferris to free her enough that she can knock him down with a kick. Snipping her zip ties with a carpet knife, a fight ensues, during which Kensi slashes her captor across the chest. But just then, two more of his accomplices show up to detain Kensi, again.

Back at the boathouse, Callen and Joelle have “the talk,” during which she claims that she was trying to protect him when she broke things off. Callen says he can forgive the lying — “That’s part of the job” — but not her betrayal. She shoots back, “If you can’t forgive me, how will you ever forgive yourself for all the times” you did same? 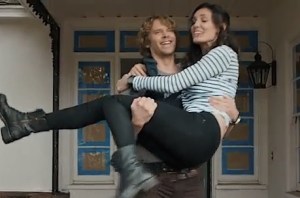 When hospitalized Granger guns down an assassin who’d been sent to his room, Eric uses a chain of text messages on the dead woman’s phone to locate Kensi. Arriving on the scene, Sam and Callen take out the other operatives, while Deeks cuts Ferris’ “If you take one more step….” speech with a double-tap to the head, which Kensi finds to be quite the romantic gesture. The reunited duo then order “dad” (Callen) to get out of the room as they embrace.

As Deeks carries Kensi out, the fellas realize that Sabatino, whom they had handcuffed to the SUV, has vanished. Back at HQ, meanwhile, Hetty invites Chegwidden to stick around and help clean up her legal mess. Later, Hetty pays Granger a visit at the hospital, imploring him to get some rest. 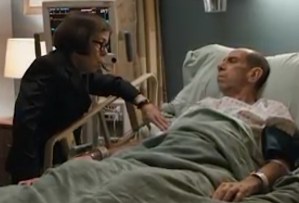 “I dreamt there was a buzzard and he kept circling me,” Granger shares, to which Hetty replies, “Don’t be a smart-ass, Owen.”

One way or another, that moment would seem to, by coincidence or design, open the door for any number of exit storylines for cast member Miguel Ferrer, who passed away last month, made his final appearance in this episode and will be written out of the CBS drama/paid tribute when it next airs on Sunday, March 5.

What did you think of the mole hunt climax, Joelle getting busted and the possible ways Granger could be written out?