In CBS’ Doubt, defense attorney Sadie Ellis (Grey’s Anatomy‘s Katherine Heigl) has found the man of her dreams. He’s kind, he’s smart, he’s funny… he’s apparently the first guy she’s ever really felt like she could talk to. He also happens to be her client, and he’s about to go on trial for first-degree murder.

Sadie, along with an assist from fellow litigator Albert Cobb (Psych‘s Dulé Hill), is heading up the case of Dr. Billy Brennan (Rescue Me‘s Steven Pasquale), a pediatric surgeon awaiting trial for the 1991 murder of his high school sweetheart; the case resurfaces after a former classmate comes forward and claims Billy once confessed to the crime. To make matters worse, the instrument that was used in the deadly attack turns up, and is found to contain not only the victim’s blood, but traces of a second individual’s blood that just so happens to match Billy’s blood type.

Before consulting with Sadie or Albert, Billy agrees to provide a blood sample, hoping to clear his name — and prove his innocence to Sadie — once and for all. As made clear throughout the pilot, the two have developed real feelings for each other over the last few months — feelings that Sadie can no longer deny. She tries to eject herself from the case after her boss, Isaiah Roth (Ray Donovan‘s Elliott Gould), confronts her about this conflict of interest, but an ill-advised visit to Billy’s apartment ends in a passionate kiss. Before she leaves, Billy tells Sadie that he’d like her to continue defending him, regardless of what’s going on between them.

The next morning, Sadie goes to visit her mother, Carolyn (Transparent‘s Judith Light, appearing in a recurring capacity), who has been in prison for 34 years for the murder of a state trooper. While there, Sadie breaks down, telling her mother how much she needs her in her life, especially now that she seems to be repeating her mother’s mistakes. You see, once upon a time, Carolyn got “too close” to her own lawyer, who is revealed to be none other than Isaiah. He continues to serve as her attorney, and Sadie worries that his attachment to her mother is the reason he hasn’t been able to properly prepare her to go before a parole board. 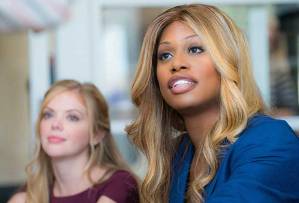 Even if you’re not initially sold on what Doubt‘s selling, you might find yourselves tuning in each week just to spend an hour with its stellar supporting cast. In addition to Hill and Gould, Orange Is the New Black‘s Laverne Cox is used especially well here as fellow lawyer Cameron Wirth, who in the B-plot works with law associate Tiffany Simon (the always charming Dreama Walker, of the gone-too-soon Don’t Trust the B— in Apartment 23) to defend an off-his-meds schizophrenic on trial for pushing a woman in front of a train. (He’s eventually found not guilty by reason of insanity.) There’s also Madam Secretary alum Kobi Libii in the role of Nick Brady, an ex-con who used his time behind bars to get his law degree through an online inmate program. He turns up at Roth & Associates seeking employment, unable to be admitted by the New York State Bar unless an employer is willing to vouch for his character.

All told, Heigl might have finally found the right post-Grey’s vehicle. Her presence, combined with a strong ensemble and compelling backstory, should hook viewers and allow the series the time it needs to work out the kinks. But that’s just our assessment of the pilot, and the jury’s still out. What did you think of Doubt? Grade Episode 1 via our poll, then hit the comments and give us your first impression.