Arrow is taking aim at one of the country’s most divisive subjects.

During this Wednesday’s episode (The CW, 8/7c), a shooter opens fire in the mayor’s office, forcing Oliver Queen – not the Green Arrow – to take a stance on gun control.

“We went into Season 5 wanting to do an episode about an issue,” executive producer Marc Guggenheim, who wrote the installment, previews. “I grew up on St. Elsewhere and Picket Fences and L.A. Law. I grew up in a time where it was commonplace – like, literally every week – for a one-hour drama to tackle the issues of the day. Somewhere along the line, the whole industry got away from that.”

Today, comedies such as black-ish and The Carmichael Show frequently explore hot button topics, “but as far as network dramas are concerned, [they’re] really not tackling current events, current issues.”

Having been on the air for five seasons, Arrow has “hopefully earned the freedom to” get weighty once in awhile, Guggenheim hopes. “In 23 episodes of television, you can have 22 pieces of candy and one episode of vegetables.”

For his healthy side dish, the EP chose to mine gun-related crime “because of its topicality, but also because of the level of gun violence” on display on the CW drama. 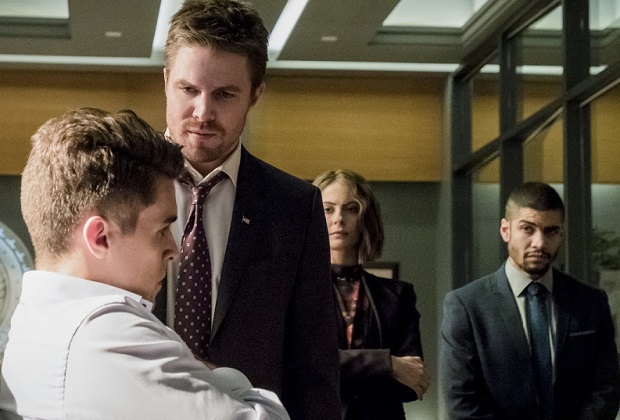 “There was an opportunity also to do an episode where [Oliver] wasn’t going to get in the Green Arrow costume,” co-showrunner Wendy Mericle notes. “From a story perspective, it was really [about] the challenge of figuring out what would an episode look like where we had to solve the issue of the day or the problem of the week with Oliver Queen as mayor as opposed to him gearing up as the Green Arrow.”

While Oliver tries to puzzle out how to protect Star City via his day job, Curtis and pistol-packing Rene – whose backstory is explored in this week’s flashbacks – butt heads over their opposing viewpoints on gun control.

“[Rene] was someone whose background we really wanted to explore,” Mericle says. “He carries a gun, so he’s a natural spokesman for that point of view.” Curtis, on the flip side, argues for stricter regulations, noting that he’s more likely to be shot as a black man.

Just as important as thosee two sides coming together to find a middle ground is the need for open discussion. “I wrote the first half of the script before [the presidential election on] Nov. 7, and the second half of the script after,” Guggenheim shares. “As you watch the episode – I write chronologically and linearly – I think you can see that in the second half, it’s about guns and gun violence, but it’s also about the state of discourse in our country.”

When Felicity at one point begs her friends to stop debating, Guggenheim realized she was speaking for “the segment of the population who considers talking about politics to be impolitic, something you’re not supposed to [do] in polite company. When did that happen?”

“Whether you voted for Trump or not, I think maybe the only thing we can agree on as Americans is that the country is as fractured now as it’s ever been since the Civil War,” he argues. “And my point of view and suggestion as a writer is it happened because we all stopped talking to each other.”

Want more scoop on Arrow, or for any other show? Email InsideLine@tvline.com and your question may be answered via our Inside Line column.