This week on Fox’s 24: Legacy, Carter literally banged down walls in order to get his hands on the flash drive, while viewers learned exactly who was behind the leak that put the Army Rangers in harm’s way.

Cornered by a wall of blue in the cop shop’s evidence locker, Carter did what I thought he was going to do in the first place — use the explosive charges to blast a hole into the wall, but here as a means to escape (after confirming with Officer Not Brian Dietzen that there was safe egress on the other side). Even so, Carter bumped up against cops and SWAT soon enough, only to see the small army be ordered to stand down, since CTU had confirmed his story and need to dash with the cash.

CTU’s involvement came after Mullins confirmed Ingram’s story best he could, having grilled Andy some. Mullins then arranged for Agent Locke’s team to accompany Carter to the train station rendezvous, provided they don’t spook super-paranoid Ben Grimes. Little does anyone know, Bin-Khalid’s son Jadalla is now also on Grimes’ tail, having realized that the addled Army Ranger is toting around one of the baddies’ burner phones. As such, just when Carter meets up with Grimes and rides a few metro stops to the place where the drive is stashed, the hand-off is waylaid by the arrival of gun-toting hostiles. A shoot-out ensues at the metro station, with both Locke and Grimes getting winged. Carter gives chase to Jadalla and his men, who had grabbed the flash drive from wounded Grimes, but loses them in a train tunnel. Once everyone surfaces topside, the baddies slip off in a van as Carter gets smacked (though not George Bailey’d) by a passing car. 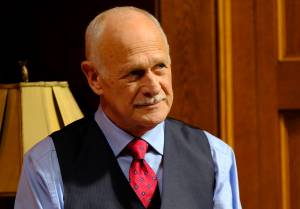 using Ingram’s CTU passcode to access the Rangers’ WITSEC identities, Donovan’s chief of staff, Nilaa, claims she was out for her morning, after-prayer run at that time, and thus couldn’t have done it. When Ingram looks into Nilaa’s alibi, she finds no street cam footage of her run — only a pic from an ATM showing her about to enter the campaign office just prior to when the files were accessed. Nilaa insists the video is not to be believed. Unbeknownst to Ingram and CTU, it indeed isn’t, because….

* … it turns out that Senator Donovan’s father, Henry, was the one who accessed and leaked the Army Rangers intel that led to their murders. Family friend Luis then arranged to fake the “damning” Nilaa video, by getting it fed to CTU with a fudged time stamp. “CTU won’t trace the leak to you,” Luis assures Henry, explaining, “It was our only play,” unless Henry was willing to see his son’s presidential campaign, everything they had worked for, get “burned down to the ground.”

* At the (ugh) high school, while Mr. Harris and Amira scrambled to fend off a student who was arriving for a tutoring session, Drew and his bludgeoned bean slipped away, crawled out a window and made a stagger for the nearby soccer field — where he collapsed, just as his assailants caught up to him. Unconscious Drew was spotted by a student, though, so “girlfriend” Amira tagged along in the ambulance, whispering to Mr. Harris that she would “finish” Drew before he could tattle to anyone.

* Nicole realized that Isaac’s girlfriend Aisha had surreptitiously phoned rival gang leader Royo before everyone left for the deal. When Nicole shared her concern with Carter, he arranged for CTU to find (!) and forward along (!!) a recording of that cell phone call. Nicole thus heard Aisha greenlighting Isaac’s death, but couldn’t do anything with the intel since henchman Jerome took her phone from her.

* Prior to leaving for the Grimes op, Locke apologized to Andy for how things ended. “Things didn’t just end. You ended them,” Andy retorted. Andy later explained to Mariana that Locke had “broken things off” between them.

What did you think of this week’s twists? Is Henry (lovable Dr. K!) truly guilty of something so despicable, or will we find out he was “forced” to do it or did it for “the right reasons”?