Warning: The following contains spoilers for Sunday’s midseason premiere of The Walking Dead — and beyond.

In the final moments of The Walking Dead’s midseason premiere Sunday, our heroes were surrounded by a group of strangers, all pointing guns at them, and Rick, in response… smiled. What the… ?!? Has he perhaps snapped just the teensiest bit once again? To find out, TVLine rang up showrunner Scott Gimple, who not only offered a definitive answer about Rick’s mental state but also weighed in on Gabriel’s departure, floated the possibility of — sorry, Tobin — a Carol/Ezekiel pairing, contemplated Maggie’s reluctance to unseat Gregory, and teased the “all-out war” that’s coming down the pike.

TVLINE | Let’s start with that smile. Has Rick lost it?
He’s not crazy. He’s not having some sort of breakdown — and I don’t mean to be insensitive with the word “crazy.” He is completely healthy in that moment. We’ll get answers in the very next episode, but obviously, if he’s smiling like that and he’s surrounded by this large group pointing their guns at him, he definitely feels that the situation they’re in could get better.

TVLINE | Could we take Rick’s reaction as a sign that Gabriel didn’t just cut and run?
That right there also may be why Rick is smiling. It seems that they’re following this trail that Gabriel kind of put them on, and suddenly, they meet up with all these people… Could they have Gabriel? Could they just know something about it? Rick’s found this note in [the supply log] that seems like it was a message from Gabriel, because Rick knows this guy. He knows he wouldn’t [steal Alexandria’s food and leave]. Now, Rosita doesn’t agree with him. But maybe this means Gabriel didn’t do that. Maybe Rick was right.

TVLINE | Meanwhile, at the Hilltop, Gregory is a complete and total tool. Why doesn’t Maggie stage a coup and replace him already?
She doesn’t feel like she would want that job. It seems like she’s being looked to by Jesus and people at the Hilltop for answers on how to go forward. So I think she’s being sort of thrust into that role rather than seeking it. She’s certainly not interested in doing any sort of coup. I think she’d really love to see Gregory come around. 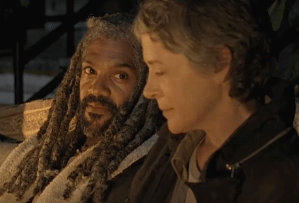 TVLINE | We learned in this episode that Ezekiel is continuing to check up on Carol. Could his interest be more than friendly?
Hmm… I would always let the story say that sort of thing. But me, just looking at the show, there’s no doubt that he’s taken a shine to her. At the very least, there’s mutual respect. They could say to each other, “Game recognize game.” They’re both fine actors — and I don’t mean Khary [Payton] and Melissa [McBride], I mean Ezekiel and Carol. Khary and Melissa are incredible actors, but Ezekiel and Carol are no slouches, either! (Laughs) I would totally cast Carol to play a role on the show.

TVLINE | Do we get to the actual everybody-vs.-the-Saviors war by the end of the season?
I wouldn’t say one way or the other, but we’ll definitely see aspects of some stories from the all-out war story. [The finale] is just a huge swath of tones and worlds and characters and moments.