“Grodd. He’s got my dad! And he has him in Gorilla City!”

With those words, dropped at the end of the Feb. 7 episode of The CW’s The Flash, Jesse Wells set in motion an adventure that will transport Barry & Co. back to Earth-Two, where things are gonna be a bit… bananas.

Setting the stage for the two-parter, which launches Tuesday, Feb. 21 with the episode “Attack on Gorilla City,” returning guest star Violett Beane tells TVLine, “Jesse’s dad got a message from some of the sentient gorillas, who asked to meet him — as gorillas do — and you know Harry, he loves an adventure. So he mounted an expedition and took 10 people into the forest with him.”

Harry, though, has since turned up missing, “and that’s why Jesse comes to Earth-One in such a panic,” says her portrayer. “She is very scared for her father, so the team starts to help her find him.”

While Jesse and Wally stay back to keep Earth-One safe from a looming threat, Barry — with Caitlin, Cisco and Julian in tow — makes tracks for Earth-Two, where Gorilla City incarcerations, warring ape factions and other kinds of drama await them. “It’s going to be pretty massive,” Beane says of the multiverse arc. “There’s a battle between Grodd and his own gorilla friends,” sparked by a power play by Solovar, a sentient ape voiced by Keith David. “There’s a stampede, and there’s a huge gorilla fight towards the end of the first episode,” in an unexpected location.

(Speaking of locations, a fun fact: Beane shares that a relentless Vancouver snowfall forced filming of the Gorilla City scenes to be moved south of the original site. After all, “You can’t really have a jungle with snow in it!”) 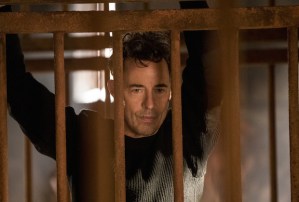 recently minted speedster Jesse “was kicking butt on Earth-Two,” Beane reports, “but she’s happy to be back. Maybe not under these circumstances, but she’s very happy to see Wally.” In the midst of about as long-distance a relationship as two teens could endure, “There’s always that moment of, “Are we still…?'” says the actress. “But ultimately they really missed each other a lot. There are some cute scenes.”

There’s also the matter of Jesse meeting her father’s Earth-19 doppelganger, H.R Wells. “That’s one of the first moments in the next episode, where Jesse is like, ‘Oh my God! Oh wait, you’re not my dad,'” Beane previews. And with Harry MIA for the time being, H.R. may even aspire to play ersatz pop to Miss Quick. “There is a bit of that,” says the actress with a laugh. “At least, he tries.”