Riverdale‘s resident nice girl has a wild side!

“Oh my God, [Betty] lets loose, let me tell you!” Lili Reinhart shared during TVLine’s visit to the show’s set last November. “She lets loose pretty early in the season, which is going to be amazing.”

Considering how domineering Betty’s mother is, it’s no surprise that the blonde “definitely has mental-health problems that she’s working on and has a lot of built-up anger,” the actress says. All her pent-up issues speak to “the pressure that Betty feels to be perfect. She can’t show any cracks. She can’t be weak around her parents.” 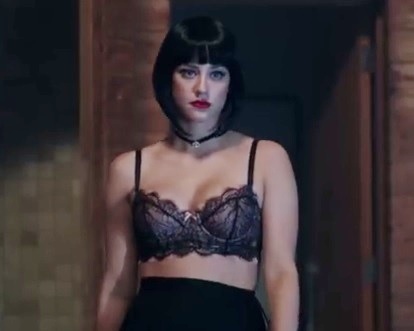 All that simmering frustration “builds up and takes over her,” Reinhart teases. “She acts out a little bit,” if you’re wondering what the black wig in the promo for this Thursday’s episode (The CW, 9/8c) is all about.

Perhaps even more shocking than Betty’s mini rebellion is the tentative understanding formed between her and Cheryl after a “shame book” emerges at Riverdale High. And with a murder still to solve, the girls might just call a truce for good.

“You see, as the season unfolds, that there’s a common interest that both of us have, and in order to get to that goal, we have to work together,” Madelaine Petsch, who plays Cheryl, describes. “I think you’ll see more of a mutual respect between the two of them, because I’m certain Betty will start to understand where Cheryl’s coming from, and that she’s not just this bitchy villain.”

Adds Reinhart: “The dynamic changes once Betty uncovers more information about Polly and Jason’s relationship in Season 1. It kind of brings them closer together once Betty… brings Cheryl into it.”

Speaking of getting to the truth, Betty’s quest for it leads her to recruit Jughead into the school newspaper this week. “They team up together to uncover more about Jason’s murder mystery,” Reinhart previews. “Because they think the sheriff and the Blossoms are hiding something, or trying to twist something.”

Riverdale fans, are you looking forward to seeing the darker side of Betty?