For more than three decades, the name Stefano DiMera has sent shivers down the spines of countless Salem residents. But on Thursday’s Days of Our Lives, it also elicited a few other emotions.

The episode marked the final appearance of actor Joseph Mascolo, who died in Dec. 2016 after a long battle with Alzheimer’s disease. Mascolo originated the role in Jan. 1982.

As previously teased by NBC, the episode found Rafe, Marlena and Anna confronting Stefano about his “transgressions against each of them over the years.” You can see part of Stefano’s encounter with Marlena below:

But things didn’t exactly turn out the way the trio had hoped. While they were busy speculating about what might happen when an incarcerated Stefano is relocated to Salem, the inmate was busy… disappearing!

Stefano’s loyal followers — not the least bit surprised that one of daytime’s most iconic villains had one last trick up his sleeve — celebrated appropriately on Twitter:

Following the discovery of Stefano’s empty cell, the episode ended with this touching tribute to Mascolo from the entire Days family: 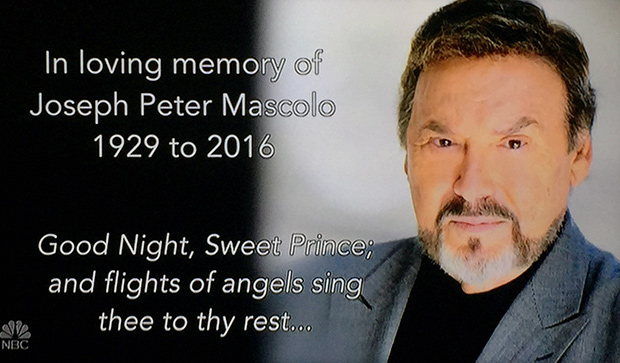 Official video of Mascolo’s final bow will be added when it becomes available. In the meantime, what did you think of the episode? Stefano’s great escape? Whatever’s on your mind, drop it in a comment below.