During this Thursday’s episode (The CW, 8/7c), which finds Dean struggling with rapid memory loss, “there’s a beautiful scene where he is talking to himself in the mirror, and he just cries a single tear,” Ruth Connell, who plays the Winchesters’ witchy frenemy Rowena, tells TVLine.

The hunter’s Memento-esque condition is the result of a spell that forces Sam to call upon Rowena for help in tracking down a powerful old-world witch clan.

“You get to hear about something from [Rowena’s] past [that has] to do with this family of witches,” Connell teases. “I always love when I get to dip into the more human aspects of Rowena.”

Read on as Connell previews “one of the strongest scripts” she’s read, in addition to Rowena’s feelings about Lucifer’s offspring.

TVLINE | What has Rowena been up to since we last saw her? Is there a whole other life she’s leading?
[Laughs] I dread to think what she’s been up to. It’s interesting where this episode picks up. The first scene, I’m in a gambling den. [Laughs] Her romance didn’t work out… so she’s been entertaining herself. Then the Winchesters need her help. She’s drafted back into action. There’s something in it for her, as well. The episode revolves around this witch family and a book they have, which is called the Black Grimoire. I’m very excited for Rowena to know about this book and get her scrubby paws on it.

TVLINE | Is Rowena helping the Winchesters all about her getting this book? Or does she maybe have some affection for the boys?
[Laughs] It’s whether Rowena can admit to herself that she’s enjoyed being involved in this push-and-pull with the boys. I do think there’s an element she finds entertaining. There’s not a lot of people on her level to play with, right? It’s lonely out there. That speaks to the whole Crowley/Winchester relationship, as well. And they are two strapping lads, as she likes to say. Personally, as an actress, I love when I get to play with Jared [Padalecki] and Jensen so much. 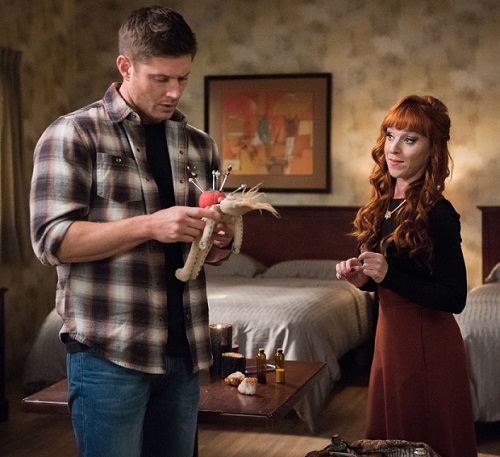 TVLINE | What does Rowena think of Dean’s plight? Does she have sympathy for him? Does she think it’s amusing?
What I love about it is how it allows you to be with them when somebody’s losing their memory. There’s a level of intimacy when somebody can’t remember, when they’re not going to remember, [and] what that allows you to show and to be. I hope it comes [across] in the episode. Other than that, it’s just fun to be sidling up to Jensen. [Laughs] I’m like, “I think I should be closer. I need to be closer. I think Rowena should be closer to Jensen for this scene.” [Laughs] So it was a lot of fun, and Jensen’s always so happy to play. And Jared was so much fun in the scenes with the three of us.

TVLINE | Looking at what Rowena went through with Lucifer, how does that impact how she feels about his child? What does she think they should do about that?
Fascinating, isn’t it? It’s such a fascinating question. I was actually at Warner Bros. doing ADR when a couple of the writers were discussing that storyline farther down the line, and it’s complicated. It brings up so many questions. I’m not sure what I can say.

TVLINE | Does she have any strong feelings one way or the other? Lucifer really put her through the wringer…
He did, and it’s never good to have Satan’s offspring, right? [Laughs] The Rowena/Lucifer situation, it’s the most spurned you can ever be by a lover: them snapping [your] neck. Her dreams of Rowena and Lucifer being the Posh and Becks of the 21st century were shattered, and I don’t think that’s something, as a woman, you ever get over or forgive. So there’s a lot of depth of hatred and loathing there, for sure. … I love the fact that Rowena sent him to the bottom of the ocean. She got to deal with him herself. She got to take her own action, and I love that the writers do that in the show, that they keep allowing the women to rescue themselves in a lot of ways. Rowena is a survivor, as well. Even Lucifer didn’t quite manage to get the best of her.