On the CBS medical drama, Angels Memorial’s infected only have ten hours left to live. If that weren’t enough to convince you the situation is really dire, 15 people are already dead — and Mario, Malaya, Elliot and Ariel could be next. (We already lost Heather last week.) After an unfortunate run-in with one of the men who stole the CDC van containing the virus, Leanne gets exposed and joins her sick colleagues in the quarantined area. Jesse is so distraught, he can’t even make a joke.

The good news: A potential vaccine exists. It’s too risky to test on a child, so Leanne volunteers herself. After all, she’s got no one waiting for her at home, she points out. Jesse counters that she’s his family. Still, she goes through with the injection, not that it does much good as she’s coughing up blood.

Staring death in the face makes the doc reflective as she confides in Ethan that Ariel is sleeping on her sofa while there are two unused beds upstairs. “What the hell is wrong with me? Am I that afraid of those memories?” Leanne wonders. Ethan suggests that maybe replacing them with something new feels like a betrayal.

Speaking of Ariel, the young girl turns into a little rock star when she steps up to help Leanne intubate a patient. Sure, she’s crying and scared through the whole process, but she does it. 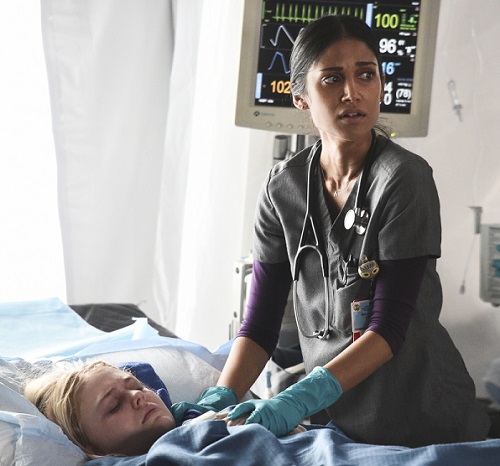 Meanwhile, Will, Ethan and Angus discover that there’s a man inside the quarantined zone with the antibodies needed to save everyone. There’s no time to synthesize a vaccine, so they do a person-to-person blood transfusion, starting with Leanne. It’s just in the nick of time, too, because Elliot is hallucinating, and Mario and Malaya are about to collapse.

When Leanne wakes up, she receives some news: “We didn’t lose anyone else.” Phew!

And because there’s nothing like a near-death scare to bring out romantic declarations and big changes, Noa kisses Mario — “I’m glad you’re here… even if I did have to catch a deadly virus,” he says — while Leanne returns home to make breakfast and send Ariel, now sleeping upstairs, off to school. So it’s a surprisingly happy ending for all after an intense couple of episodes.

Code Black fans, what did you think of the Season 2 ender? Grade it via the poll below, then hit the comments to back up your pick!