Tonight on Arrow (The CW, 8/7), John Diggle aims to embrace his (latest return to) freedom and a shinier/happier self, only to discover that one of his teammates is heading down a dark path.

TVLine invited David Ramsey to preview Diggle’s vengeance against General Walker, his concerns about Felicity, a personal face-off with Prometheus and more.

TVLINE | You’re out from behind bars, again. Can we keep it that way?
No, let’s make it three times! How about I just go back in?

TVLINE | I joked to [showrunner] Wendy Mericle that when you learned of Dig getting thrown back into prison, you must have been like, “Really?”
Yeah, a little bit. A little bit. But you gotta run with that. That was a bit of a loose end with that character, in terms of the general. And it was a great way of using that to torture Oliver, to show Oliver that [Prometheus] has control, that he can make his life into whatever he wants to make it. But I’m out now!

TVLINE | What is Diggle’s mindset now that he has been sprung, with regards to Walker? To deliver what is due the general?
I think so. And not just that, but he’s full throttle with the team now. We’ve seen “internal, sad Diggle” for long enough — but for good reason. It isn’t every day that your dead brother comes back to life, who you then kill! Also, there’s a direct line between his choice to trust Andy 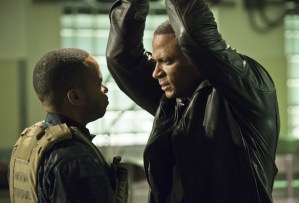 and the death of the Canary (played by Katie Cassidy). Theres a straight line there, so his grief and guilt was well-placed. But I think he’s on the other side of that now. Now it’s time to get back to business, and he does. It’s about getting Prometheus, and for this [week’s] episode particularly there’s a crisis in terms of what Felicity is doing. Diggle will call Felicity out on where she’s going, emotionally and morally.

TVLINE | With regards to the dark net and her new Helix buddies?
That’s correct. Who are they? Who are these people? Obviously that’s a running theme on our show, the team members helping others who can’t see through the fog. We have “blinders,” as Felicity called them when Oliver was helping Black Siren, trying to find redemption. That theme is repeated with Diggle and Felicity, as she taps into her dark side, the way John did last season, the way Oliver does every Wednesday, to try to find a way of gaining an edge for the team. Diggle is the one that calls her out on that, for good reason.

TVLINE | Wendy said that coming out of his latest ordeal, Diggle won’t have the same level of fatalism. So if he ends up “in a room” with Walker, how might that go down? What’s the dilemma before him?
Well, Diggle is a highly moral character, right. And I think he’s done putting bullets in people as a way of delivering justice. He’s learned from that with his brother. So, he will see it to the end, doing whatever he can to see this man behind bars, by the letter of the law. That’s who Diggle is at this point. There’s also a new member of our team, in Dinah [Drake, played by Juliana Harkavy], 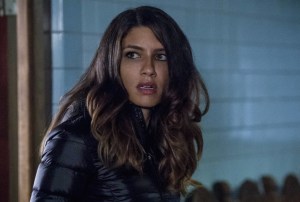 and Diggle is the one that really welcomes her. He brings her into the fold and helps her get a job, get a place, with training. It’s Diggle who takes her by the hand; that’s where he is right now.

TVLINE | Why do you think he assumes that “welcome committee” role, as he did with Rene/Wild Dog?
It’s a place that he wants to go, needs to go. I don’t think it’s any secret, most people feel this way, that Diggle is the most evolved in the group. He’s had his demons, he’s fought in several wars, many tours. He’s been a civilian, he’s been a soldier, he’s been married, twice, to the same woman, he has a child. The only time we’ve seen Diggle at a place of true compromise was when he was faced with the “rebirth” of his brother, and his brother’s brainwashing.

TVLINE | Which as you said is a most incredible situation–
–that doesn’t ever happen. So we don’t really ever see Diggle shook in that sense, the way we’ve seen Oliver going back and forth with a number of things. So I think that he’s the one to [help the newcomers]. Number 1, Dinah needs a welcoming committee, someone to help her find her place. She’s still dealing with what she went through, so there’s an adjustment that she has to make and Diggle’s the one to help her through it. Same with Rene.

TVLINE | The sooner he can help these self-made vigilantes get into the right head space, the better.
And the better they can be more functional members of the team. There’s also that. That’s most important to him as a soldier. 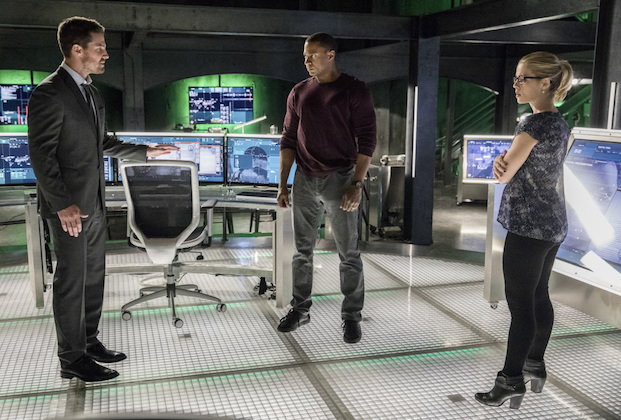 we saw you on set in the fall, you were hoping for more “OTA” moments, with Original Team Arrow. Will we get some of those in episodes coming up?
That is the plan. We hadn’t seen much of that this season in general, and much of that is because we have new team members, and those stories facilitate the Big Bad more so than anything else. But now that John is out of jail, thankfully, you’ll see more OTA.

TVLINE | Safe to say that Adrian Chase scored some points there with Diggle?
Without a doubt. Adrian Chase is incredibly sharp, and I think he’s earned the respect of Diggle, which isn’t easy. They will be getting closer, you’ll see more of that.

TVLINE | Will we be seeing Lyla and his son anytime soon?
That’s a six-episode arc right there, isn’t it? The “new Amanda Waller” of ARGUS and the second in command of Team Arrow, married. With a child that they found out used to be a girl through Flashpoint. His wife, who has her finger on the pulse of the Suicide Squad. I mean, what does that dinner look like? For me, that’s a story.

TVLINE | Give me that on CW Seed — Dinner With the Diggles.
The Diggles! Pitch it!

TVLINE | Any other last teaser about what’s coming up?
There’s a nice little moment between John Diggle and Prometheus, in terms of a fight. [What’s ahead] is all about him, it’s all about finding out who this guy is and how he manipulates Oliver and the rest of the team, by showing Oliver that he doesn’t have to kill him, he can just take every piece of his life away. That’s a very interesting way that the story is told.

TVLINE | And in ways more painful that just whaling on a guy physically.
Which he also does! It makes for an interesting storytelling, so I’m very interested to see how we stop this guy.