One Life to Live legal eagle Nora Buchanan will next exhibit her expertise in the courts of Port Charles, when Hillary B. Smith begins a short stint on ABC’s General Hospital (starting Monday, March 6).

When OLTL’s broadcast run came to an end in 2011, Smith was among the cast who continued on with the long-running soap’s “version 2.0,” on Prospect Park’s short-lived The Online Network. Meanwhile, costars such as Roger Howarth and Michael Easton migrated their Llanview characters to GH — until a legal kerfuffle with Prospect Park led them to abruptly adopt brand-new Port Charles personae.

That legal stalemate recently came to an end, though, clearing the way for new, legit OLTL/GH “crossovers,” and Smith was the first to be summoned. “It was this fun, out-of-the-blue thing that seemed to work out for everyone,” the two-time Daytime Emmy winner told TVLine, leading into this in-depth Q&A.

TVLINE | How is Nora doing? What has she been up to?
I think she’s kind of been living happily ever after, with Bo (played on OLTL by Robert S. Woods). Doing her legal thing and loving on her husband, seeing her kids. I’m wondering whether she has more grandchildren about now…? I don’t think so.

TVLINE | And what brings her, finally, to Port Charles? The way that judge was barking at her in the casting announcement video, it seems she is caught in quite a legal hullabaloo.
[Laughs] Well, I can’t get into any of the specifics. All I can say is I was asked to come to Port Charles for some sort of legal thing, and that’s what I went and did!

TVLINE | I know there’s a pretty bananapants custody battle in play, involving Lulu….
You’ll get nothing from me! I’m not supposed to say a word. But there are a lot of things cooking in Port Charles. They were talking me through things and I was like, “Really? And that’s going on too? Really?”

What’s really fun was seeing all these old buddies that I hadn’t seen. The first person I saw was 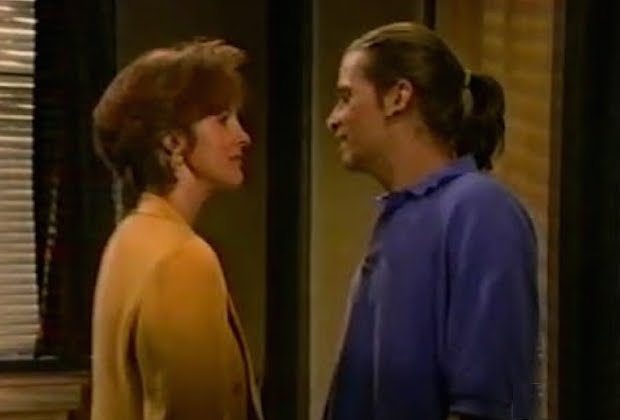 Roger Howarth (Franco; Todd, OLTL). And then Michael Easton (Finn; John, OLTL) came around the corner. I met Nancy [Lee] Grahn (Alexis) years ago when she was on Santa Barbara, and we’ve been friends since then. And I knew Genie [Francis, Laura], but I’d never met Carolyn Hennessy (Diane)…. I’ve known [Michelle] Stafford (Nina) for eons, so it was really fun to catch up with her. You may not be working with them, but everyone comes through the makeup room at one point or another, so you see everybody.

TVLINE | As “professional” as we all like to pretend to be, did it ever hit you that Nora Buchanan is having a scene with Laura Spencer? The Nora, the Laura?
I have to tell you, it’s been so many years, Matt, but I guess the fan in me is still there, which gets all giggly and stuff when I see people I have watched for years. So yeah, I guess so! Listen, after all these years of being in this industry and really  stepping aside to enjoy my life and not be on a rigid schedule, it’s fun to step back into it and be doing nothing but General Hospital. It’s fun to shake the rust off and go, “OK, here we go!”

I have to tell you, that is a very, very professional cast. I saw some performances that I just thought were really breathtaking. Most of them are just spot-on. They’re very clear about who they are, who their characters are. They’re very respectful of the show that they’re on, and they’re very respectful of each other. I’d forgotten the “family” feeling you have. I know I how I feel about my One Life to Live family, but it was really nice to see another family in action, and how warm and welcoming they are.

TVLINE | You talk about the caliber of talent. One silver lining of having only four daytime soaps now is that the cast of each is so deep. I mean, GH alone has a Genie Francis, a Michelle Stafford, a Maura West, a Roger Howarth…. It’s kind of crazy.
Yeah, it was really, really impressive. And I hadn’t seen Finola [Hughes, Anna] since she was on All My Children, so that was fun, to see her again. And it was a big surprise for them, since no one knew I was coming. When I walked around a corner, it was like, “Oh my God, what are you doing here?!” Also, a lot of the behind-the-scenes people, like MK Weir, and Gary Tomlin, and Phideaux Xavier, the directors…. I hadn’t seen them since my One Life to Live days. There’s a lot of people from “x” number of years, between As the World Turns, The Doctors and One Life to Live….

TVLINE | You mentioned Roger and Michael — is Nora going to do any double takes when she sees their new characters? Is that a fun thing you’ll be playing?
I… can’t say a word! You’ll have to stay tuned.

TVLINE | Had you given up on the notion of Nora ever appearing on GH?
When it first came up, it wasn’t really in the cards. [When ABC cancelled OLTL] we had the whole Prospect Park thing going on, and I went with Prospect Park [and OLTL‘s online continuation]. When that kind of ended, I figured that with all of the lawsuits going on, Nora was pretty much retired. But when the decision was made and a judicial answer came forth [in December], it was pretty much the next day that I got the call from [GH executive producer/former OLTL boss] Frank [Valentini] — and it was very surprising. I did not expect it at all. It was like, “Hey, you want to come play for a little bit?” I was like, “As long as it’s fun,” and he said, “I’m going to tell you something — you’re going to enjoy these people,” and he was absolutely right. I had forgotten how good everyone is. You watch [on TV] and you go, “Yeah, that’s a great performance,” but when you watch it being taped, it’s so exciting — and there were some great, great performances. It was like riding a bicycle: yeah, you wobble a bit at first, learning the lines, but you just ride along with everyone else.

TVLINE | As far as slipping back into Nora’s skin, is there any particular example of something she does that Hillary doesn’t? Something you had to keep in mind when returning to the role?
That’s a really good question. One thing I had to keep in mind was that Nora was a listener and a watcher. Even though I am a listener and watcher, I’m more of a talker than Nora is! I had to make sure that I was really listening. Also, I’m much more judgemental than Nora is. Nora believes that everyone has a right to a fair trial, a right to representation, where I would be like, “Are you kidding? Guilty!” There’s an impartiality and a passion for the law that drives Nora to believe that regardless of what happened, whatever the client wants, the client deserves — and should get.