It’s tempting to take one look at the multimillion-dollar homes and luxury cars the characters have in Big Little Lies, and ask: “How can these people have any problems?” But as one character says, “You can’t make a perfect world. No matter what, s—t happens.”

S—t most certainly does happen in the star-studded HBO miniseries (debuting Sunday, Feb. 19 at 9/8c), including a grisly homicide that sends shockwaves through the seaside community of Monterey, California. But the great thing about Big Little Lies is: The murder is almost beside the point. The vicious battle for power and status waged between the Monterey moms is gripping enough, and serves as a showcase for some fantastic female performances. 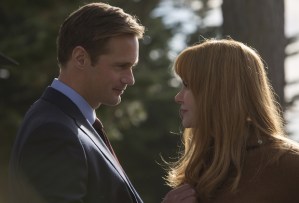 Monterey is a town of big fake smiles and passive-aggressive politeness, and its filthy-rich moms take the term “helicopter parent” to a whole new level. (As one neighbor puts it, they’re more like “f—king kamikazes.”) That includes Madeline (Reese Witherspoon), a hard-charging “super mom” whose parenting isn’t all that super, and Celeste (Nicole Kidman), whose picture-perfect marriage is developing some cracks around the edges. The sense of place here is excellent, immersing us in a pristine yuppie utopia where these alpha moms rule with an iron fist.

The arrival of Jane (Shailene Woodley), an unpolished single mother with a checkered past, sparks a savage rift between the moms — with their kids getting caught in the crossfire. And we know someone ends up dead, with flash-forwards to a crime scene and nosy neighbors eagerly telling cops all the local gossip they’ve overheard. But the four episodes screened for critics not only don’t reveal the killer; they don’t even reveal who died. And it’s actually a brilliant storytelling choice, because you start to look at everyone as a potential suspect and victim. 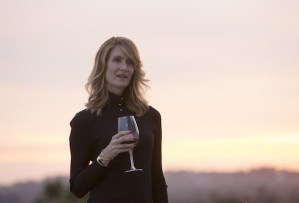 Top to bottom, the Big Little Lies cast is stacked. We already know how good Witherspoon is at playing the chipper overachiever (see: Election; Legally Blonde), and she absolutely shines here as Madeline. The brittle vulnerability that Kidman brings to Celeste makes it some of her best work in years. And the deep bench of supporting actors includes Laura Dern as Madeline’s bitter rival Renata, Alexander Skarsgard as Celeste’s protective husband Perry and Adam Scott as Madeline’s “Mr. Sensitive” husband Ed. Everywhere you look, there’s an Emmy nomination waiting to happen.

TV veteran David E. Kelley wrote all seven episodes (based on Liane Moriarty’s bestselling novel), and he clearly knows how to write for women, deftly balancing the comedy of the moms’ bitchy verbal sparring with the drama of the very real problems they’re facing. The direction from Jean-Marc Vallée (Wild) is a bit chilly, clinically viewing the Monterey moms from a safe distance. But that fits the subject matter, as does the series’ washed-out color palette. (It acts like a forgiving Instagram filter, hiding every shameful flaw.) Plus, the fact that one writer and one director handled all seven episodes helps the miniseries feel like it’s all of a piece.

If the story sags at all, it’s when Woodley’s Jane is the focus — only because her dark backstory is so far removed from the rest of the moms, it feels like it’s from a different series altogether. Big Little Lies is at its best when it plunges us into the trenches of the Monterey moms’ social warfare, fought on the battlefields of elementary-school functions and kids’ birthday parties… where words can cut almost as deeply as knives do.

THE TVLINE BOTTOM LINE: Armed with an acid-tongued wit and packed with Emmy-worthy performances, Big Little Lies is a big win for HBO.