If you thought that 24: Legacy was borderline restrained with its post-Super Bowl premiere — only raising our collective eyebrow with the almost-routine tasering of a CTU boss — Episode 2 was here to reassure you that “ridiculous” will still be in abundant supply.

First and foremost, there was the next leg of former Army Ranger Eric Carter’s scramble to reclaim the flash drive containing the late Sheik Ibrahim Bin-Khalid’s U.S. sleeper cells and activation codes. Dealing with an “angry and unstable” Grimes, Carter learned that his on-edge former team member wants $2 million, cash, in trade for the volatile intel. Former CTU boss Rebecca Ingram can’t get her hands on such a wad of money, nor does she want to risk tipping off the leak by putting in an official request, so Carter turns to his drug-dealing brother Isaac — who’s also unable to come through. Pressed to help, Isaac notes that the cops recently seized north of $4 million in a drug bust, so Carter sets out to steal that cash from the local precinct’s evidence locker.

Saying there’s no time to read in the local cops, nor of course does he know whom he can trust, Carter goes about grabbing that cash by first drawing the attention of some patrolmen, and then getting the drop on them with one of their pistols. Carter straps explosives to the flatfoots, then has them haul him into the precinct, in “cuffs.” He has them take him to the evidence locker, where he near-instantly finds the seized millions — just as the station house gets wind of what he is up to and corners the would-be thief with gunfire.

In between running comms on this incredible op, Ingram has some ‘splaining to do to CTU director Mullins, whom she incapacitated when he discovered she had accessed the system to assist Carter on the sly. Ingram lays out the sitch, including how Mullins is one of three people (along with the heads of the NSA and CIA) who had access to the Army Rangers’ WITSEC files. Though not quickly enough to hold off Carter’s robbery attempt, computer jockey Andy ultimately learns that Ingram‘s CTU access code was used to view the top-secret files — via the personal laptop of Nilaa Mizrani, husband John’s chief of staff!

Already in this hour, 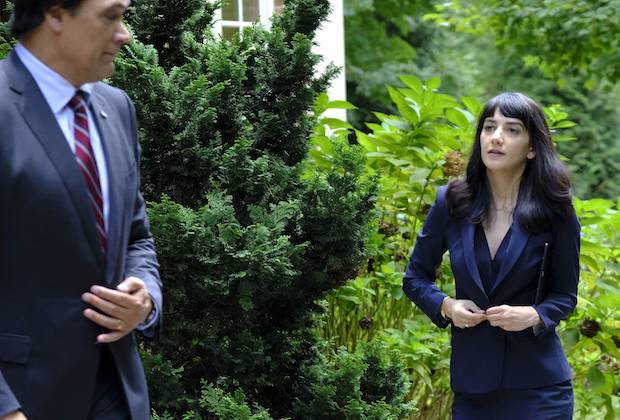 Nilaa had drawn side eye when Senator Donovan’s father Henry (played by Gerald McRaney) disclosed that the rival presidential campaign was about to out her as a member of a radical mosque that has prayed for the death of U.S. troops. Henry says there is no way his son gets to the White House with a hater-traitor on his team, so Donovan confronts Nilaa. She claims that in the tell-tale photos she actually was at the mosque to confront the “crackpot imam” and condemn their distortion of the religion. Donovan vows to stand by his chief of staff rather than cast her aside — though he has yet to learn of her fiddling with his wife’s access code….

In addition to Carter’s robbery, the episode’s other absurd development occurred in the high school subplot, where Amira’s placation of a suspicious Drew didn’t last long at all, after he caught her in a clinch with Mr. Harris. Rather than attempt, I dunno, a “cover story” about forbidden romance, Mr. Harris instead physically and clumsily assaults Drew, brutally smashing the lad’s bean against the classroom floor. In the middle of the day. With students passing by right outside. Have fun cleaning that up on the QT!

* When Aisha overheard that Isaac plans to dump her after the big deal with the Dominicans that she set up, she phoned the rival gang leader, Royo, to hint that no tears would be shed if Isaac doesn’t return from the meet alive. Ain’t she sweet?

* Bailey Chase made his debut as CTU agent Thomas Locke, whom Andy was put in charge of steering away from the Mullins mess — though analyst Mariana later whispered to Locke that something fishy was afoot. Also, Andy and Locke seem to have some unfinished business from their past; more on that in Hour 3.

* Bin-Khalid’s son Jadalla was pressured by one of his men to launch some sort of terrorist strike in lieu of having the sleeper cell codes. When Jadalla insisted on waiting to claim the flash drive, the henchman pulled a gun on him. Without so much as flinching, Jadalla maintained that as the sheik’s only surviving son, “only God will decide when I die.”

* Grimes actually gave Carter an extension on the deadline for the cash drop. There are no deadline extensions in 24!!!

What did you think of 24: Legacy‘s second hour?