Jack Bauer may be MIA, but another day has to be saved, in Fox’s 24: Legacy. Now that the reboot is up and running, will you go along for the thrill ride?

The real-time thriller’s revival stars Corey Hawkins (Straight Outta Compton) as Eric Carter, the youngest squad leader in the history of the U.S Army Rangers. Six months prior, his team captured terrorist leader Sheik Ibrahim Bin-Khalid — after which, they were all sent home and into Witness Protection to elude a fatwah. But when Eric realizes that his pals are being methodically picked off one by one, it becomes clear that the list of their new identities and locations has been leaked.

Having just barely, literally dodged bullets and beatings inside their own home, Carter whisks away his wife Nicole (Greenleaf‘s Anna Diop), leaving her, somewhat begrudgingly, in the safekeeping of his hoodlum brother Isaac (Ashley Thomas). Thing is, Eric stole Nicole away from Isaac back in the day, so there’s little love left there. (As an added wrinkle, Isaac’s current girlfriend doesn’t take kindly to the idea of his ex hanging around, commanding his attention.)

With Nicole safely tucked away (though wondering if her husband truly left his op behind), Carter makes contact with Ben Grimes (Mad Men‘s Charlie Hofheimer), the only other surviving team member — and a paranoid schizophrenic at that. They discreetly rendezvous to review the contents of a strong box that Grimes pinched from Bin-Khalid’s compound, and inside a secret compartment they find a flash drive containing a list of sleeper terror cells throughout the United States, with activation codes that would set in motion an attack on U.S. soil. Upon making the discovery, Carter and Grimes are descended upon by baddies, and though Carter is able to fend them off, Grimes scampers away with the flash drive. More paranoid than ever, Grimes plans to hold the explosive intel for ransom, and if the USA doesn’t pony up, he’ll turn it over to the terrorists. 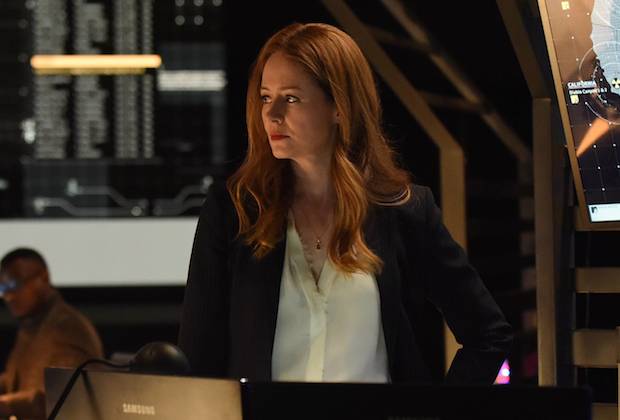 we meet Rebecca Ingram (Homeland‘s Mirando Otto), the former National Director of CTU who after Bin-Khalid’s capture stepped down so that she can focus on helping her husband, Senator John Donovan (NYPD Blue‘s Jimmy Smits), with his run for president. But when a frantic Carter comes calling with the bombshell that one of the three intelligence agencies entrusted with the Rangers’ WITSEC identities — the NSA, CIA or CTU — hung them out to dry, she is compelled to bail on a big fundraiser to instead sniff around her old stomping grounds, with the help of computer wonk Andy (Scandal‘s Dan Bucatinsky). Senator Donovan is none too pleased that the would-be First Lady has bugged out on her first commitment after exiting CTU, a grievance egged on by his chief of staff Nilaa (State of Affairs‘ Sheila Vand).

At CTU, Rebecca circumvents her hand-picked successor, Keith Mullins (The Flash‘s Teddy Sears) — not knowing if she can trust him, after all — to sneak into their servers and run point on Carter’s meet-up with Grimes. When Mullins becomes curious and comes close to uncovering what his predecessor is up to, Rebecca pulls a Jack Bauer and tasers the director into submission.

Eric Carter is in the terrorists’ crosshairs. An on-the-edge Grimes has gone AWOL with the MacGuffin. Rebecca Ingram is surreptitiously staging a CT-coup. Oh, and some Chechen high school girl and her chemistry teacher are among the sleeper cellzzzzzz. Will you tune in for Hour 2 (airing Monday at 8/7c), and beyond?