Crazy Ex-Girlfriend‘s Season 2 finale was billed as Rebecca and Josh’s big wedding day, and we did see some vows being made… just maybe not the vows we were expecting.

Josh was feeling a bit jittery, especially when a stressed-out Rebecca blurted out the name “Robert.” (Who’s that now?) Plus, her psycho former fling Trent popped back into the picture to drop an envelope full of Rebecca’s past misdeeds in Josh’s lap. Josh nobly threw that envelope in the trash… but he also ditched Rebecca at the altar to join Father Brah in the priesthood (!). Rebecca almost threw herself off a beautiful Malibu cliff as a result, but instead, she found the strength to kick her con-man dad out of her life for good. And to make a solemn vow of her own: “Josh Chan must be destroyed.” 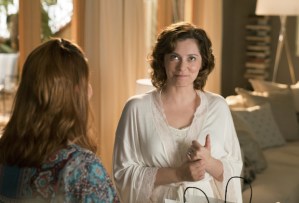 We also got maybe our biggest peek yet into Rebecca’s past with the “Robert” backstory: While she was a student at Harvard, she had an affair with a married professor named Robert. And when he broke things off, she set fire to his stuff, Left Eye-style. Rebecca was charged with arson, and got sent to a dreary mental-health facility where she was tranquilized with a heavy dose of meds. So it looks like Josh Chan isn’t the only man she’s been “crazy” about?

After that super eventful — and fantastic — finale, we had about a hundred questions for Crazy Ex-Girlfriend showrunner Aline Brosh McKenna, who wrote and directed the episode. Here’s what we learned when McKenna chatted with reporters after a screening of the finale.

That ending was planned all along.

“We knew that this season was going to end with ‘Josh Chan must be destroyed,'” McKenna reveals. “Always. I think it was in our original pilot pitch.” But the Josh-becomes-a-priest piece of the puzzle didn’t occur to the writers until “maybe halfway through the season,” she says, when they were looking for a way for Josh to leave Rebecca, but not for another woman. “He is a seeker. And there is something very spiritual about him. So the priest thing just really… it really hit the idea on the head.” But what if they didn’t get renewed for a third season? “We write like Tim McGraw says: Live like you’re dying,” McKenna laughs. “So we just wrote like we were getting renewed.”

Season 3 will be the season of “the scorned woman.”

After getting jilted in humiliating fashion, Rebecca will indeed be seeking payback next season. McKenna says that Rebecca adopts a new persona each season, and “in a time of crisis here, a new persona leaps into her mind, and it’s the scorned woman. We’ll see how consistently she follows through on that, and how her feelings evolve as she recovers from this big rupture.”

She adds that Rebecca’s newfound feelings of hatred for Josh aren’t that big of a switch: “Psychologically speaking, hating someone is the same as loving them. Because the opposite of love is apathy. It’s not hatred. It’s the flip side of an obsession.” And of course, Rebecca may not have given up on a happy ending with Josh Chan just yet. McKenna says there are “a lot of dynamics in that for us to explore. How over him is she? Will she be over him for the whole season, or will there be phases of that? It’s an obsession, so it moves into a different phase.” 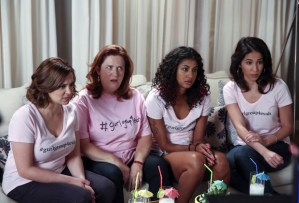 Rebecca’s girl group will help her in her quest for vengeance.

Rebecca has three strong allies in Paula, Valencia and Heather, who are the only ones who heard her ominous cliffside declaration, McKenna says. “If that happened to you, no one would be surprised that you’d be like, ‘Eff that guy.’ But your girlfriends for sure would be like, ‘Something must be done.'” But the other girls also “don’t know anything about [Rebecca’s] past,” McKenna hints. “So now all of these women are going to get to know her in a different way.”

Plus, don’t forget: Paula still doesn’t know that Rebecca kissed Nathaniel in the elevator, and that’s why she rushed her wedding with Josh. And that secret may end up unraveling their friendship, McKenna teases: “As we know, Paula is very, very sensitive to having been lied to. There are some other shoes to drop there.” 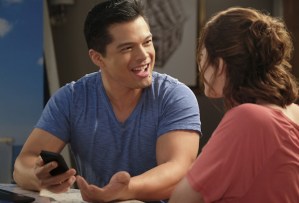 Josh isn’t evil — but he still managed to mess everything up.

McKenna calls Josh “a benevolent narcissist,” referring to his tendency to seek out pretty girls who make him feel good about himself. She thinks he fled to the priesthood to spare Rebecca’s feelings, in a way: “It’s a path that, in his mind, is not hurting her… because it’s not like he’s with another girl. He’s choosing something that in his mind is so exalted. I think also like two percent of his mind figures: ‘My parents will forgive me.'”

Josh’s decision not to open Trent’s envelope is “the most courageous thing that Josh has done all season,” McKenna declares, “because if he did, he would have something to blame the destruction of the marriage on.” But she also hints that Josh has “no idea” what he’s getting into with becoming a priest. “He’s done no thinking, no serious research. It’s a panic move. We’ll see how much of it suits him.”

Rebecca’s dad set the template for all the men in her life.

John Allen Nelson guest-starred in the finale as Rebecca’s absentee dad Silas, who seemed happy to walk his little girl down the aisle… but then hit her up for money to pay for his son’s braces. “I love the acting choice he made: She gives him the check, and John put it in his pocket,” McKenna notes. “He never looked at it. And that’s what a con man does.” But Silas still looms large in Rebecca’s life, she says, since she’s chased after his love with all the man she’s dated: “He really is the Bundt cake mold into which she has poured every man since then, in a way.”

Rebecca’s mom is not happy about any of this.

“If you notice, her mother does not rush down to comfort her at the end,” McKenna says with a laugh. “There’s a little bit of Grey Gardens that happens with the two of them.” Not only is Naomi embarrassed that the wedding didn’t happen, but she’s humiliated that Rebecca aired out all of her dirty laundry on that Malibu cliffside, McKenna observes. “Naomi likes things to look good, no matter what’s underneath them, so I don’t think any part of this is going to make her happy.” (What would make us happy, though: more Tovah Feldshuh in Season 3.) 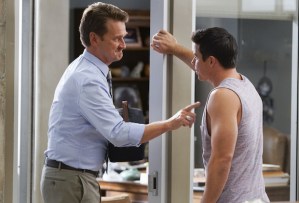 Darryl and White Josh are the epitome of “opposites attract.”

McKenna points out that Darryl and White Josh’s tiff about marriage and kids really exposed the sharp contrast in their personalities. Darryl is, she says, “very much like Rebecca. He dreams and gets excited about things,” whereas “White Josh lives in an empirical world… he breaks things down.” But McKenna thinks White Josh gave Darryl a sliver of hope with that comment about kids: “He kind of messed up by saying, ‘Having kids, I get. Marriage, I don’t get.’ I think the second that Darryl heard that, it was like a little cauldron started to boil in the back.”

Rebecca’s past will continue to inform her future in Season 3.

Expect more flashbacks to Rebecca’s mental-health woes next season, McKenna hints: “One thing I know we are going to explore next year is: What has her past mental-health history been?… I think she’s had bad experiences with being diagnosed and given medication that makes her feel bad. So we’re going to learn a lot more about her past struggles with her mental health, and to rein in these issues that she has.”

And the Robert incident just further illustrates how Rebecca has always handled relationships with men, McKenna says. “We wanted to show another instance in her life where she had engaged in extreme behavior, and that this was a core wound, and that she was still recovering from it.” But she emphasizes that “it’s in keeping with who she is. There’s probably a kindergarten boy somewhere who has been scarred by Rebecca Bunch.”

Now it’s your turn: Grade the Crazy Ex-Girlfriend finale in our poll below, then hit the comments and give us your take on Rebecca’s wedding-day disaster.