It’s weird to see the two friends on the outs following last week’s killer twist, in which Cas saved the Winchesters’ lives. Sure, Dean is grateful that Cas cares about them, but he’s worried about the cosmic consequences of breaking the death pact with Billie the reaper. So when the hunter isn’t stewing, he’s snarking about agreeing to help Cas’ angel buddies in order to make sure he doesn’t do anything else stupid.

That brings us to Castiel’s squad: the recently killed Benjamin, Mirabel and Ishim, who doesn’t exactly greet Cas with open arms. In fact, he makes it perfectly clear that he thinks Cas has gotten soft. And before he got cozy with humans, he left his battalion wingless to command his own flight. You know, the one with Uriel and Balthazar, who died. 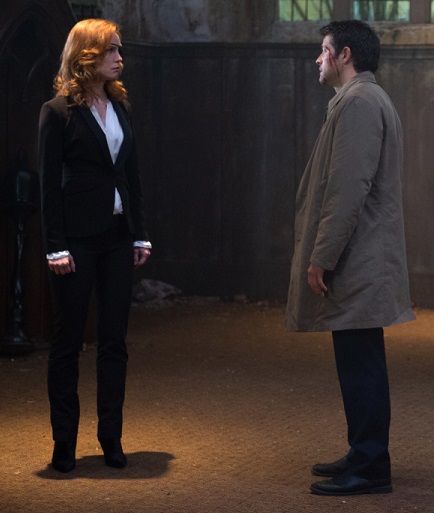 For the time being, those issues are put aside seeing as how the original gang is being hunted by Lily Sunder (guest star Alicia Witt). Angels didn’t come to Earth before the apocalypse, except in the rare case of 1901, Cas explains to Dean and Sam. He and his brethren visited because one of their own had married a human (aka Lily) and had a nephilim daughter with her. While Cas killed their angel brother for breaking their most sacred oath, Ishim took care of the half-angel/half-human offspring, who grow into power and can destroy entire worlds. But he let Lily live, which was a big mistake on his part. She brushed up on her angel magic and became almost immortal. Lily’s survival all these years later also means she can tell Dean and Sam the ugly truth: her daughter was human, and Ishim was basically a jilted lover/stalker. She broke his heart, and so he broke hers by murdering her child.

Now that he’s aware of his brother’s betrayal, Cas comes to Lily’s rescue and kills Ishim. “If you leave here, and you find that you can’t forgive me, I’ll be waiting,” he tells Lily before she takes off.

Back at the Men of Letters bunker, Dean and Sam try to reassure their friend that he’s changed for the better. Perhaps the biggest evidence of that comes from Cas, himself, when he expresses doubts about his ability to kill Lucifer’s child, which will be like a nephilim on steroids. “There was a time when I wouldn’t have hesitated, but now I don’t know,” he admits.

Supernatural fans, was the glimpse into Cas’ past revealing? And what flavor pie do you think Dean bought with Ishim’s cash? Hit the comments!