Six years ago this Friday, Allison Mack returned to Smallville for the superhero series’ final stretch — and boy, did she come back with a bang. Just ask Black Canary!

Having last been seen in the Season 10 premiere, in which she mysteriously gave herself over to the Suicide Squad and subsequently disappeared, Chloe resurfaced in a most unexpected way, as an avatar in the virtual realities that the nefarious VRA (Vigilante Registration Act) had secretly forced upon Clark Kent aka The Blur (ugh), Lois Lane, Oliver Queen/Green Arrow and Dinah Lance/Black Canary.

In the course of her bid to convince Oliver & Co. that what they were experiencing wasn’t real, Chloe at one point was forced to face off against Dinah (played by Alaina Huffman). Revisit that unexpected clash below, as Chloe rocks a white pantsuit and Matrix-style moves: 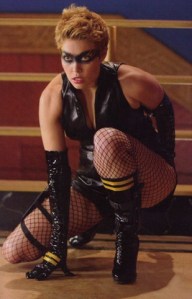 Even once all of her friends were unplugged from their fake realities, Chloe still had other business to attend to — explaining her disappearing act, and alliance with Rick Flag’s Suicide Squad, to true love Oliver. Previewing that awaited reunion, Justin Hartley told me at the time, “They’re going to get together and talk about what happened, why she left. They’ll try to patch things up.”

To that end, Oliver rightly gave Chloe a hard time, saying, “I just stopped looking for you,” figuring that is what she wanted. When Chloe tried to explain how the Doctor Fate helmet guided her away from her friends, Oliver countered, “Did the helmet say anything about how I’d be sitting here alone, listening to old voice mails just to hear your voice…? Or that I’d be scanning every face on the subway in hopes I’d come across your smile — never to find it?”

Chloe explained that if she had attempted a proper goodbye, if she had so much as brushed his cheek, “There’s no way I’d walk out that front door. And there hasn’t been a day that I haven’t dreamed about when I would walk through it again.”

“Are you sticking around, for a while?” Oliver dared to wonder. “Yeah…,” Chloe answered. And after a beat, he smiled and said, “Good.”

As for whether Smallville would fly in the face of canon and in the very end pair Green Arrow not with Black Canary but the blonde computer whiz, Hartley told TVLine, “Hopefully there will be a happy ending [for Oliver and Chloe]. I don’t know that there will be, but… I like them together, so hopefully they end up together.”

Spoiler alert: They did.