Need to catch up? Check out the previous Riverdale recap here.

In its first episode, Riverdale gave us a nice, juicy murder-mystery to chew on with the death of Jason Blossom. And in its second episode, it… revealed the killer?!

Rather than save the big reveal for the season finale, Riverdale came out guns blazing on Thursday night, with the sheriff arriving at school to haul in — Jason’s twin sister Cheryl. But is Riverdale’s queen beyotch really responsible for her beloved brother’s death? Let’s take a closer look at her actions this week. 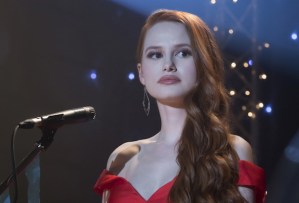 First, Cheryl butts in on school principal Mr. Weatherbee’s morning announcement to declare that she and her family won’t rest until Jason’s killer “is walking the green mile to sit in Ol’ Sparky and fry.” Hmmm, could just be misdirection. And in science class, she tells Archie her twin intuition is telling her the killer is “someone we all know”… before plunging a scalpel into a poor frog’s midsection. That is a wee bit incriminating.

But when Cheryl’s in Betty’s bedroom after their joint mani-pedi, Cheryl digs around for info about Betty’s sister Polly and her failed romance with Jason: “Didn’t they have a big fight this summer?” And when Betty asks why she’s prying so much, Cheryl drops the nice act: “Because you dumb cow: Someone shot my brother, and I think it was your crazy, tweaked-out sister!” So… even if she did have something to do with Jason’s disappearance, Cheryl definitely didn’t shoot him, right?

Then at the pep rally, when Archie jogs by in her brother’s old jersey number — I knew that was a bad idea — Cheryl breaks down in tears and runs off. When Veronica comforts her, Cheryl says something odd about Jason: “You don’t understand… he was supposed to come back.” Come back from what, exactly? (Remember, Cheryl’s original story is that she and Jason both fell out of the rowboat while trying to retrieve Cheryl’s lost glove.)

Finally, “the morning of reckoning” comes: Weatherbee and Sheriff Keller march into Cheryl’s science class, and she’s not surprised to see them. She holds out her wrists to be cuffed and declares to her classmates, “I’m guilty.” But of what? If she didn’t shoot Jason, who did? Plus, Jughead says Jason’s autopsy revealed that he didn’t die on the Fourth of July, but a week later. Which means he didn’t drown that day, and he wasn’t killed by the gunshot Archie and Miss Grundy heard.

So even though Cheryl’s now in custody, this case is obviously far from closed. (Which is good, because again, we’re only up to Episode 2 here, people.) Now let’s see what else was going on in “A Touch of Evil”: 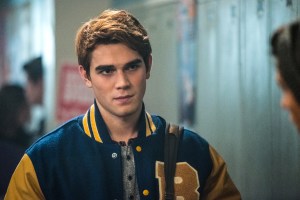 HOT FOR TEACHER | Archie wakes up sweaty (and shirtless!), guilty about not telling anyone about the gunshot he and Miss Grundy heard the day Jason disappeared. He texts Betty to talk, but she’s tired of being his fallback option. So he goes on a shirtless late-night run (?) to Miss Grundy’s house (!) to chat. He wants to go to the cops, but she’s firm: If he does that, she could get fired, he could get expelled and they could both go to jail. Really? Just for hearing a gunshot? Methinks she’s just looking to cover her student-sexing butt.

But it might not just be their secret to keep anymore. Because Jughead sees Archie looking guilty and remembers they were supposed to take a Fourth of July road trip together, but Archie cancelled it at the last minute. Then when Archie and Miss Grundy have another intimate conversation at school — she assures Archie that their relationship is real, and going to the cops could ruin it — Jughead sees them together. He confronts Archie, who tells Jughead about the affair and the gunshot. Jughead can’t understand why he’s “worried about some cougar.” But Archie threatens his old friend: “If you tell anyone about this…”

Archie’s ultimately a good guy, though, and stands up for Jughead when Reggie bullies him, earning a black eye in the process. He sort of confesses to his dad Fred, without using any specifics, and Fred encourages him to do the right thing, “even if it costs you.” So at the pep rally, he tells Miss Grundy he’s going to Weatherbee in the morning to come clean, with or without her. And he does head there the next day, only to see Weatherbee and Sheriff Keller rushing off to get Cheryl. So his secret with Miss Grundy is safe for another week. But man… I really don’t trust that woman. 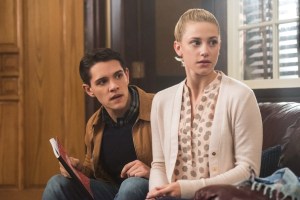 SQUAD GOALS | Betty and Veronica may be on the cheerleading squad together, but Betty’s not feeling too cheerful after Veronica locked lips with Archie in the closet last week. Veronica showers Betty with roses, cupcakes and mani-pedi gift certificates to apologize: “It was such a basic bitch move.” To Kevin’s horror, Betty actually accepts Veronica’s apology, but only because she thinks Ronnie will forget about her in a week. Betty also thinks she can be just friends with Archie — but when he strums a romantic song at lunch, she gets all weepy and realizes she can’t be around him right now.

Betty continues to freeze Veronica out at cheerleading practice, and even says, “Archie and I were fine before you got here.” But Veronica’s not having any of that: “It’s not my fault he doesn’t like you.” Ouch. That drives Betty to offer Ronnie’s free mani-pedi to Cheryl (yuck), and we know how well that went.

Veronica confides in Archie, though, that she still thinks she and Betty “were meant to be best friends.” Archie shares a story: Back in second grade, when he was in danger of being held back, Betty tutored him every day to make sure he passed, so they could still be in the same class. When he passed, he kissed Betty and asked her to marry him. She said no, but “ask me again when we’re 18 and I’ll say yes.” Kevin was totally right, you guys: endgame!

Betty’s mom still wants her to steer clear of Archie, Ronnie and especially the Blossoms: “That family, everything they touch, it rots.” But Betty softens a bit when Veronica tells her Archie is “legit miserable” without her: “Sometimes a friend is better than a boyfriend.” After the pep rally, the two girls go to Pop’s for milkshakes — old-fashioned vanilla for Betty, double chocolate for Veronica — and make a vow to never let a man come between them again. But then Archie walks in, and you can practically see both of their hearts flutter. He and Jughead join the girls, and we have a nice little teen friendship foursome brewing here. You know, apart from all the murder.

* Did you catch that Cheryl’s cheerleader T-shirt reads “HBIC” on the back? Yeah, that… totally fits, actually.

* I really liked Josie and the Pussycats’ modern update on “Sugar, Sugar” — mostly because the original is an abysmal piece of sickly-sweet pop schmaltz. That’s right: Come at me, Archies stans!

* Betty was actually a little terrifying when she told Cheryl to leave her bedroom “before I kill you.” Hmmm… could there be a homicidal maniac lurking underneath that tight blonde ponytail?

* Definitely enjoying the additional screentime Jughead got this week, especially when he said, “Sardonic humor is just my way of relating to the world.” Same, Jughead. Same.

Was Cheryl really involved in her brother’s death? And who put that bullet in Jason’s forehead? Hit the comments with your theories.