The title of Thursday’s How to Get Away With Murder asserts that, “Not Everything’s About Annalise.”

Except, of course, it absolutely is.

As the hour unfolds, it becomes clear that even if the disgraced professor didn’t kill Wes herself, her very existence played a key role in the grisly crime. (Not to mention, ever since she got to jail, Annalise has unwillingly been the object of her cellmates’ fascination.)

But Thursday’s installment is also very much about Frank, who spends the episode trying to convince investigators that he was responsible for the house fire and Wes’ subsequent death. And, thanks to assists from Laurel (who fibbed to the cops that Frank knew she was pregnant a whole week before Wes died), Oliver (who hacked the DA’s office, only to learn just how deep their investigation into Annalise actually goes) and Bonnie (who… frankly looked miserable the entire time), Frank was ultimately arrested and charged with Wes’ murder by the end of the hour. That, I guess, is the good news. 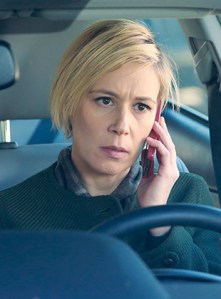 The bad news? Despite Bonnie’s best efforts to have Frank take the fall completely, he’s merely charged as Annalise’s co-conspirator in Wes’ death. Professor Keating, it seems, will be known as “inmate” for a long time to come.

But something more concerning is revealed in the episode’s closing minutes (because no one knows how to construct an anxiety-inducing final scene quite like Pete Nowalk): After Bonnie informs Annalise that she’s still being charged for Wes’ murder — prompting Annalise to admit, “I deserve this” — we become privy to a flashback that suggests Bonnie is at least partially responsible for Mr. Gibbins’ death, too.

See, Wes did get into Frank’s car when he exited the police station that night, after leaving the immunity agreement unsigned — but he didn’t stay in the vehicle for long. After exchanging bitter words with Frank about his relationship to Annalise and Laurel, Wes came to the realization that Rebecca was dead. Frank may not have killed her, but she’s dead all the same. “You know what? I’ll walk,” Wes told Frank — and as he wandered off down the street, Frank called Bonnie to tell her they’ve got “a puppy problem,” meaning Wes now knows Rebecca was killed. Bonnie advised Frank to tail Wes wherever he might go… and just like that, the ever-infuriating chalkboard title card appears, and we’re left until next week to wonder how Lurky McChurchmouse — in the words of my colleague Michael Slezak — got involved with Wes’ untimely death.

Other observations from the hour:

* After getting mercilessly intimidated by her cellmates, who insist she killed Wes (and Sam, for that matter), Annalise borrows a razor blade from her Lone Prison Pal and uses it to cut off her own hair. Badass, party of one.

* Michaela reminds her classmates that she is not one to be messed with, first by passionately defending Annalise to President Hargrove, then by calmly informing Oliver that he will not be going to the police with his newfound information about Sam Keating’s death. Badass, party of two.

With that, I hand it over to you. What did you think of Murder‘s latest outing? Drop a comment below with your reaction to the episode.