It’s out of the frying pan and into the fire for Clarke & Co. when The 100 returns for its fourth season on Wednesday (The CW, 9/8c). … Wait, did I say fire? I meant nuclear apocalypse.

Picking up moments after the gang “won” the war with ALIE, Season 4 thrusts the survivors into an uncertain future — on with a six-month expiration date.

“This whole season’s based around how we’re going to deal with fighting an enemy that we go to war with,” Eliza Taylor teases. “There are some kind of unusual pairings, which is great. The thing about having such a gigantic cast is that some of us have only ever been in one scene together over three years. … I think you’re going to see a lot more odd coupling.”

Read on to find out what’s ahead for Clarke, Bellamy, Octavia, Murphy and more: 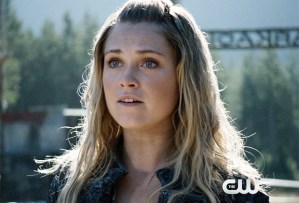 CLARKE | Part of Clarke’s journey at the beginning of Season 4 will be “stepping up more and accepting herself as the leader,” Eliza Taylor says. “It’s really fun to feel like she’s asserting herself and not taking s–t from people who don’t know as much as she does.” Of course, with great knowledge comes great responsibility: “She has to be very careful about how she goes about telling people [about the impending nuclear apocalypse] without starting a riot.” Fans of Bellamy and Clarke’s friendship will also be happy to know the two are “on the same team again” and are “sharing the leadership role.” On the romantic front, Taylor says Clarke is “still grieving Lexa” and “doesn’t really have time for relationships right now.” She does, however, have time to delve into the “turbulence” she’s been experiencing with her mom through a bit of “role reversal.” 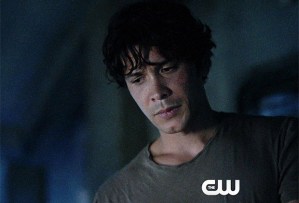 BELLAMY | When Bellamy isn’t being crushed under the crippling weight of his “guilt and remorse,” Bob Morley’s character is dealing with the “fallout side of the [ALIE] story … and the emotional scars that are left behind from the actions that [people] did whilst on the chip.” Meanwhile, Octavia’s “darker turn” will inspire a sense of “loss” in him. “She doesn’t really need … or listen to his advice anymore. It’s a bit of a blow for him. At some point you have to take a backseat with the people you care about.” On the romantic front, Morley admits it’s “tricky” for Bellamy to open up to people, which is why he loves his character’s relationship with Clarke. “That’s why people might gravitate towards that [pairing], because there is a side of Bellamy that she brings out that doesn’t really come out with anybody else. (As for Bellamy’s relationship with Luna, Morley calls it a “work in progress.”) 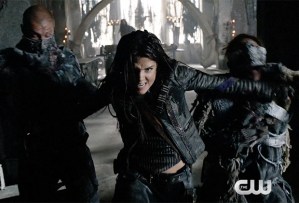 OCTAVIA | No longer the “adolescent girl that was trapped underneath the floor,” Octavia is a loose (and deadly) cannon in Season 4, Marie Avgeropoulos says. Yes, Octavia is still mourning Lincoln — the actress likens “Linctavia” to Romeo and Juliet — but she’s not letting her grief keep her down. Instead, she uses assassinating people “as an out to not feel things.” Speaking of feeling things, Octavia has a “significant interaction with one of the male counterparts in a different tribe this season,” though the actress is quick to remind us, “No one will ever replace Lincoln. … Don’t freak out.” We’ll also learn more about Octavia’s past during flashbacks to the Ark, where we’ll encounter a few familiar faces… including Pike! (I smell a ton of dramatic foreshadowing.) 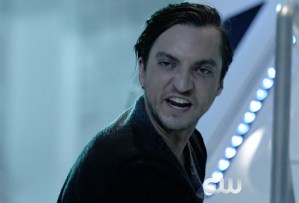 MURPHY | “We’re going to see a relationship that is strained through the adversity of knowing the world is coming to an end,” Richard Harmon says of Murphy and Emori in Season 4. “I think that’s a hell of thing to put any relationship through, but I know those two really care about each other.” You can also expect Murphy to have tension with Jaha, though Harmon acknowledges, “There’s tension with murphy and everyone.” And maybe it’s best for people to keep their distance. “He’ll ditch them in a second if it means his own survival,” Harmon says, “which is maybe not the best quality to have in a friend — but he’s a survivor.”

What are your hopes for Season 4? Drop ’em in a comment below.