This week’s episode of Arrow aimed to accomplish a lot — and damn if it didn’t hit the bull’s-eye on all counts.

First and foremost, Oliver shifted his promise to hand off the Black Canary mantle into high gear, waving off ridiculously impressive resumes (“It’s a feel thing”) to instead zero in on the closest thing to bashert (as Rory puts it) he saw: a female vigilante/”urban legend” who couples elite hand-to-hand combat skills with a sonic cry, obtained years ago via the Central City particle accelerator explosion.

Oliver, with Curtis and Rene, first approaches this woman on a rooftop in Hub City, offering her a “home,” a team, a place to train, but she swiftly declines before slipping away. Curtis uses his computer prowess to identity their prospect as Tina Boland, a former CCPD detective. Green Arrow consults over the phone with CCPD Captain Singh, who, after a quick nudge from The Flash, vouches for Tina, revealing that she went deep undercover until her partner Vinny got killed by drug lord Sean Sonus.

Oliver and the boys confront Tina again, just as she’s torturing one of Sonus’ lieutenants, to his death. Seeing a bit of himself in her, Oliver offers to help Tina “find her way back,” but again — nope. When Tina goes after Sonus by herself, she is waylaid by the crook’s own metahuman power, to dizzy people with sonic waves. Curtis develops tech to dampen Sonus’ power before they, with Tina, confront him in the midst of a deal for the drug he peddles to kids. Tina gets the drop on Sonus and, despite Oliver’s strong suggestion otherwise, puts multiple bullets into her prey.

That would not be the last Oliver sees of Tina, though. Rather, she surprises him by showing up at the mayor’s office, where she shares that she doesn’t feel as “liberated” as she hoped, having vanquished her partner/lover’s killer. “How do you live with all that pain?” she asks Oliver. He says it helps not to be alone, before she signs on to be a part of the team. Oh, and one other thing: “Tina Boland” was her undercover name. Her real name is… Dinah frickin’ Drake! 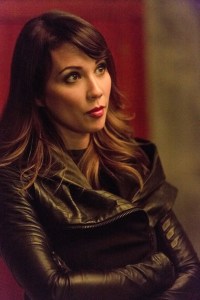 we got to know no less than the Talia al Ghul, who as Oliver recovered from his beating did her research, then confronted him about his extremely circuitous (and deadly) road back home. After revealing herself to be Yao Fei’s mentor (the whole age thing is a “family secret,” says the daughter of He Who Has a Lazarus Pit), Talia offers to help Oliver cripple Kovar by taking out one of his revenue streams, a Russian who traffics in young girls. Once they are done with that, Talia tasks Oliver with taking on the “real fight” that’s been under his nose all along — his father’s list. And to help him do that while keeping a hold of his true identity, she advises creating a monster — becoming “something else,” in the guise of a hooded vigilante.

Elsewhere in the episode, Felicity’s “dark” storyline finally revealed itself via, well, the Dark Net, where she went rummaging for dirt on General Walker that would free Diggle and instead found a young female hacktivist (Kojo Sledgehammer) who had been inspired by Felicity’s college-era capers (as Ghost Fox Goddess). Kojo is admittedly a bit bummed that “GFG” fell off the radar to become an IT girl/tech exec, but she firmly plants the speed for Felicity’s activist self to rise again, as seen when Miss Smoak cracks open the flash drive from the “Helix” group, which succeeds in getting Diggle freed to go home and hug his wife and daughter, er, son.

What did you think of “Second Chances” and all that it accomplished?