Warning: The following contains spoilers for Tuesday’s The Fosters premiere.

Oh, Callie, always finding trouble, even when she’s trying to do the right thing.

The Fosters‘ Season 4 winter premiere on Tuesday night was no exception for the teen, who found herself in a car with presumed killer Troy. After they got into an accident, Callie ran for her life, while Troy fled the scene. Trying to be an upstanding citizen, Callie went to the police station to make a statement about the hit-and-run, unaware of the fact that leaving an accident is a felony.

Will Detective Gray, who put Kyle behind bars, take advantage of Callie’s situation? It sure seems so, and her good intentions don’t matter.

“It’s her record and her word against his,” star Maia Mitchell tells TVLine. “On paper, Callie has all these issues. She’s been in juvie twice, and that doesn’t look good for her. So it’s this really frustrating thing of, her record doesn’t reflect who she is at all.”

Below, Mitchell previews how Callie’s latest challenge will strain her relationship with boyfriend AJ. (Hint: It has to do with Aaron.) The actress also talks about the “intense and strenuous” aftermath of Jesus’ brain trauma on the Foster clan.

TVLINE | Is Callie looking at a protracted legal battle?
Yes. [Laughs] Very long, very involved, very traumatic. It’s going to be an ongoing thing that she’s going to have to wade through.

TVLINE | Who’s her source of help? Who’s her support system?
Stef is. Stef really understands Callie and understands why she’s put herself in that situation. They both share this really strong sense of social justice. Even though the way Callie goes about it isn’t the most productive or safe, I think Stef sees a lot of herself in Callie. So you see [Stef] being her moral guide and support. Also, Aaron. She relies on Aaron a lot, which starts to push AJ away a little bit. So you’re going to see some tension there. 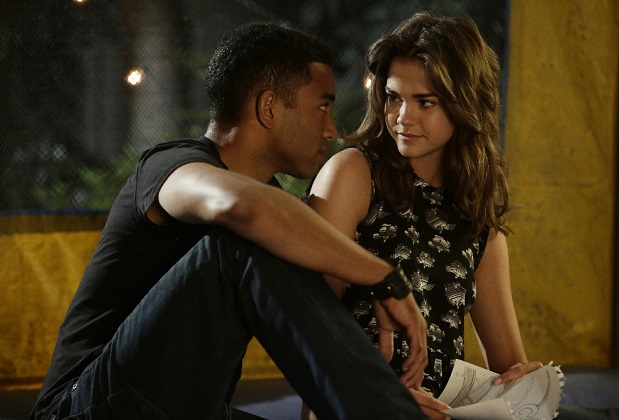 TVLINE | Sometimes, it seems like AJ’s feelings for Callie are stronger than hers are for him. How invested is she in that relationship?
He’s an amazing boyfriend. He’s a really loyal person, so whoever he’s with, he’s going to commit to and give everything to. He’s really patient and really forgiving, whereas Callie is so preoccupied with this whole mess that she’s found herself in, I don’t think she’s able to give that much of herself away. So I’m not sure it’s an imbalance of love. I think there’s really mutual love there. It’s just about where she’s at in her life. I don’t think she’s in a place where she can give all her energy to AJ — definitely not as much as he has available for her.

TVLINE | As she’s relying on Aaron, are her feelings for him changing?
You will see them changing. When she’s going through something traumatic or when she’s struggling, she often uses that kind of romantic connection as a blanket, almost — like a crutch, something to fall back onto. You’re definitely going to see her at risk of maybe confusing his friendship for romance. 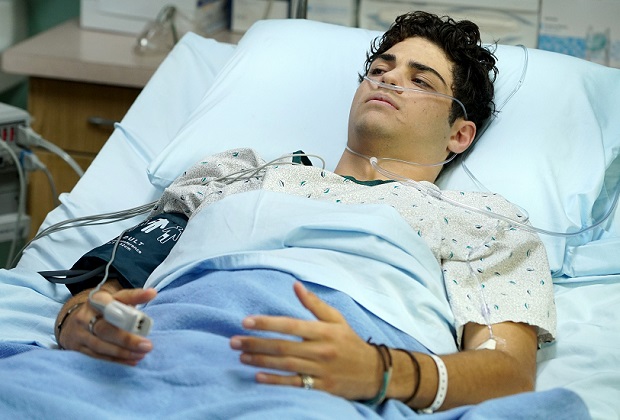 TVLINE | How is the family coping with Jesus and the changes in him?
It obviously affects the whole family. He’s going to suffer through intense mood swings. Once someone goes through something like that, it can change you a lot, change your temperament. He’s also physically challenged now. He has to be supported now. Lena really, really takes on that role as the caretaker, which she is going to find really intense and strenuous. So that definitely puts a strain on her relationship with Stef. You’re going to see them all having to really pull together for Jesus.

Fosters fans, what did you think of the episode? Grade it via the poll below, then hit the comments to back up your pick.