Will Bones‘ beau get shrunk? Will Arrow‘s traitor return? Does Suits‘ Donna want more? A little more death for those pretty Liars? Read on for answers to those questions plus teases from other shows.

Will Booth have a mini therapy session with Dr. Gordon Wyatt when Stephen Fry returns to Bones? —Mark
Given that Gordon is a shrink/chef, you can expect “an informal” session “over dinner,” co-showrunner Michael Peterson reports. “We do a little bit of food, a little bit of therapy.” The good doctor’s primary purpose, though, is to get innocent-yet-incarcerated Zack sprung, seeing as Wyatt “is the one person Booth trusts with Sweets’ psychiatric notes. [Wyatt] is going to be very key to that — and also impactful for what’s going on with Booth and Brennan at that point, because they’re going to be at a low when he shows up [in Episode 9].”

Are any Bones characters going to learn about Max’s apparent illness? —Camila
“I believe it is Episode 8,” airing sometime, “when that really comes to a head,” says EP Michael Peterson. “Brennan doesn’t like secrets, so it will very much affect her.”

Will we see Once Upon a Time‘s Belle in the wish world? —Rebecca
I am hearing that not only will you see Belle in the Wish Realm, but you’ll see her “like you’ve never seen her before.”

I know that on The Great Indoors, Brooke is engaged to Paul, but is there hope for Brooke and Jack romantically? — Stephanie
Were Paul but the only obstacle! On. Feb. 16, in the episode titled “DTR,” Psych alum Maggie Lawson begins her arc as Jack’s new romantic interest, Rachel. And while in addition to that we will see more of the Paul/Brooke relationship, you can be assured that the chemistry between Brooke and Jack will remain undeniable.

Have we seen the last of Evelyn/Artemis on Arrow? She was my favorite of the new recruits (betrayal notwithstanding!). —Jonny
Actually, when I last spoke to Wendy Mericle, the Arrow scribes were in the midst of hashing out a return scenario for Little Miss Benedict Arnold. “We have a really cool, exciting twist for how she’s going to reappear,” the EP teased, noting: “The interesting thing about the choices Evelyn has made is that as much as she took the moral high ground when confronting Oliver, she has allied herself with someone who is even worse,” in Prometheus. “She’s gone from the frying pan into the fire.”

Can you give any type of Scandal scoop? —Nakitha
Almost more so than the premiere’s election/assassination twists, Katie Lowes was raving about the Quinn-gagement when I saw her this month. “I loved it. Quinn was like, ‘Oh by the way, I’m holding this disgusting, charcoaled hand, which really turns me on. But I want to be with you, Charlie!’” she shared. “We actually joked all day about taking the ring off that dead hand [and putting it on Quinn]!” Describing Quinn’s fiancé as a “cuddly-dark dopey dope” (whereas Huck is plain “scary”), Lowes said, “There’s really good stuff coming down the pike for Quinn on a personal level, which is always a treat to play. Quinn and Charlie provide a different, dark comedic tone to the show, so we’ll get to live in that world because of what’s going with them.” 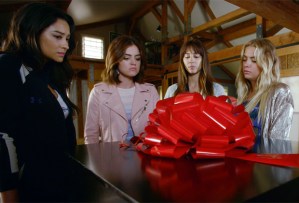 die in the last 10 episodes of Pretty Little Liars? —parkrory
“Of course!” exec producer Oliver Goldstick asserted when I hand-delivered your question. “What would Pretty Little Liars be without death? What do you think is in that big, black box on the table [in promos]? A lizard? If [you’re expecting death], you won’t be disappointed. Somebody’s gotta go.”

Any news about Suits‘ Donna that isn’t related to Harvey/romance? —Jai
Exec producer Aaron Korsh said that Donna’s storyline this season is “a bit more focused on professional, [though] when you get to a certain age or level, your professional and your personal can be intermingled.” Donna’s career “has always been personal to her,” he notes. “She’s always taking great pride in being as great as she is at her job, but the question is: Is that job necessarily enough for her? Is just being good at your job enough? We’re going to tackle those questions somewhat in the back six [episodes].”

What’s happening with NCIS: LA’s Kensi and Deeks? – Shelby
Reflecting on the “bumpy” road the two have traveled since Kensi’s debilitating injury, Eric Christian Olsen says, “We’re just coming out of the woods now, but the mole [hunt], all that, plays a very large role in what’s next. How [showrunner] Scott [Gemmill] and our writers handled that [reveal], I did not see it coming.” 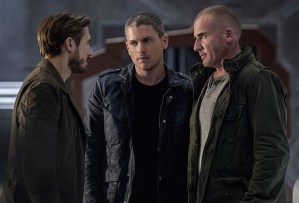 on what Snart’s role will be in the back half of Legends of Tomorrow‘s season? —Liz
As promised over the summer, Snart (played by Wentworth Miller) will join up with the Legion of Doom. “The question mark will be: Which version of Leonard Snart?” says co-showrunner Phil Klemmer. “Because obviously he’s appeared now on all of the shows over a number of years, and he’s been everything from a despicable, unapologetic scumbag to a guy who died for the Legends.” Another question for when Snart resurfaces in the flesh is, “How will Rory respond to him?” says the EP. “Mick has made a lot of moral progress, which might have reached its high water mark. So we will have to see.”

Do you have any scoop about Murphy and Emori from The 100? —Felix
Good news, Felix: Your favorite couple gets some solid screen time in Wednesday’s season premiere, during which Murphy presents Emori with a certain… proposition. (Don’t expect too much happiness outside of those two, though. The gang is still facing a nuclear apocalypse, after all.)

Anything for Agents of S.H.I.E.L.D.’s Daisy or Mack? —Lee Lee
Choosing Door No. 1, apparently I was the only one starting to sense a certain… bond… forming between Daisy and Director Mace, after he yanked her back into S.H.I.E.L.D.’s ranks. “Oh, no, no. You’re picking up some weird vibes!” was Chloe Bennet’s reaction when I suggested romantic sparking. “I love Jason O‘Mara in real life, so I would be more than happy for that, but I don’t think that’s happening.” For one thing, Bennet noted, “I don’t think Daisy is ready yet. It’s too soon after Lincoln.”

Will Geoff ever find out how Erica feels about him on The Goldbergs? —Angelique
Yes. Yes, he will.

Real questions, real answers! If you need the Inside Line on a favorite show, email InsideLine@tvline.com!  (With reporting by Vlada Gelman and Andy Swift)