Much of the recent buzz surrounding CBS’ Criminal Minds has been pegged to the return of Diana Reid (played by Jane Lynch) and the storyline it sparks for her son, BAU agent Spencer (Matthew Gary Gubler).

But far bigger things are on tap for the team as a whole, as the back half of this run nears.

Twelve seasons in, “It feels like we’ve earned the right to tell some serialized stories,” notes showrunner Erica Messer, “so we’re running with that, telling a really big arc that will last all of the back 9 [episodes] of Season 12.”

As previously reported, Lynch first appears in Episode 11 (airing Wednesday, Feb. 1 at 9/8c), while Episode 13 — which is titled “Spencer,” airs Feb. 15 and was co-written by Messer and cast member Kirsten Vangsness — is “related” to the Diana storyline. (Having previously penned episodes that killed off Gideon and paved the way for Shemar Moore’s exit as Derek, Vangsness 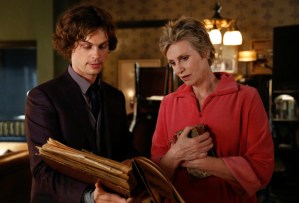 told us, “I seem to co-write the episodes that change the course for people. That does not mean the ends of people, it just changes their course. So [Episode 13] is a course changer.”)

Messer went on to add that the “Spencer” episode launches “a journey for [Reid] and for the team that I would argue we never even imagined would happen — and yet it happens, and we’re along for this ride. And it’s an intense one.”

Playing a role in that ride is a character who, akin to serial killers Mr. Scratch and Tommy Yates, will deliver a blast from the BAU’s past.

“Oh my gosh — if I said who [is returning], I would possibly give more away than I want to give away…,” Messer hedges. “But we’re really acknowledging the history of the series and being able to bring back people who have made an impact, good or bad, on our characters. And we’re having a really good time doing that.”

Someone Messer can confirm figures into the arc is Lost alum Harold Perinneau, who in Episode 15 begins a recurring run as Calvin Shaw, a former FBI agent incarcerated for killing one of his informants. When Shaw has a run-in with a BAU agent, the team must determine whether he’s a friend or foe.

“Harold is awesome, as a person and as an actor, and what he brings to this world and this back 9 is such an interesting perspective and a depth, for not only him but for Reid,” Messer effuses. “It’s a really great arc and we’re so lucky to have him.”

All told, Messer says, “This big arc that we’re doing has reenergized everybody, like, ‘We can do [a serialized saga].’ If we hadn’t been on as long as we have, with such an amazing fan base who can’t get enough of our character work, this wouldn’t be possible. But we have people who want to be with our characters as much as possible, and they’re going to have the opportunity to be with them on a journey they’ve never been on before.”

On the personal front alone, “This back 9 really takes care of everybody in a weird way,” the EP teases, “because of the changes that they’re all faced with.”