How to Get Away With Murder fans, get ready for a new — though not necessarily improved — Annalise Keating.

When the ABC drama returns from its winter break tonight (10/9c on ABC), we’ll see Viola Davis’ hard-charging attorney “in as different a light as we’ve ever seen her,” previews executive producer Pete Nowalk. “People are used to seeing her kick ass and take names. But we’re picking up the day after the house fire, after she’s found out Wes has been killed. Annalise is quite devastated and she’s in shock — I think that’s the best way to describe it.”

Oh, and she’s also behind bars at the county jail — charged with Wes’ murder and the arson that reduced her home/office to ashes.

“Because of overcrowding, she’s in a cell with two other women. Annalise isn’t very comfortable, that’s a simple way of putting it,” teases Nowalk, with a laugh.

How long will the show’s lead character be doing the cell-block tango? “That’s the big question for Annalise and for her new lawyer — and you’ll find out who that is in our first episode back,” Nowalk says. “Annalise’s feeling is, ‘Get me out of here! I can’t be in here. I have to get bail.’ That’s the struggle for her in this episode, the immediate problem she has to focus on.”

Nowalk says he and Davis were excited by the chance to see Annalise “navigate in a place where she doesn’t have the tools. She knows how the courtroom works, she knows how the campus works, and she definitely knows how her office works. She lands all the punches there. But in a jail cell, she doesn’t know what the hell to do.” 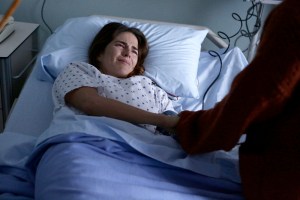 Similarly, the back half of Season 3 kicks off with Laurel in a state of shock and grief, surrounded by strangers — albeit in a hospital bed rather than a jail cell. “Laurel is in a lot of physical pain. She’s found out she’s pregnant. And she’s lost someone she loved,” Nowalk says. “She’s coping with a lot. We’ll get to see a lot of her strength in that process, but it’s also really sad, too.”

With so much burned to the ground — literally and figuratively — in November’s fall finale, HTGAWM fans should brace for some serious changes, the show’s creator adds.

“All of our sets are suddenly different. Annalise is in a cell. We’re in Bonnie’s house because we can’t be in Annalise’s anymore. Laurel’s in a hospital,” Nowalk notes. “And everyone is a sattelite unto their own. That’s really difficult because none of the same rules of the show and none of the same rules of the characters’ relationships really apply anymore. But the one thing that hasn’t changed is the characters and their emotional connections.”

Excited for HTGAWM‘s return? Any predictions about who killed Wes? Sound off in the comments!