Warning: This post contains spoilers from both episodes of Wednesday’s Season 2 premiere of The Path. Proceed at your own peril.

Hulu’s cult drama The Path is back for Season 2, and although Wednesday’s two-part premiere cleared up some of the lingering mysteries from last season… it gave us a whole bunch of new ones to puzzle over.

What really went down between Eddie and Dr. Steven Meyer in Peru? Have Eddie and Sarah both moved onto new romantic partners following their separation? Is Cal going to sabotage the whole movement with his rash actions? If he doesn’t, will Mary’s new baby do the trick? And what the heck happened to Hawk out there in the woods? (Is he so spiritually pure that he’s actually capable of levitation?)

TVLine sat down with stars Hugh Dancy (Cal) and Michelle Monaghan (Sarah) and creator Jessica Goldberg to get answers to some of the burning questions we had after watching the two-part premiere. 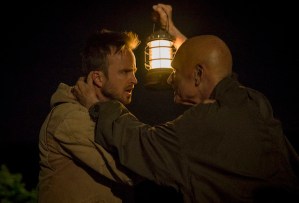 Season 2 picks up right where Season 1 left off, with Eddie journeying to Peru and finding the founder of Meyerism unexpectedly alive. But later, we see Meyerism follower Richard (Clark Middleton) and new cast addition James Remar (Dexter, Sex and the City) investigating the apparent death of Steve after he fell off — or was pushed off of — a rocky cliffside. So… WTF?

Goldberg won’t reveal what Eddie’s involvement is yet, only allowing that Steve’s death is “definitely one of the mystery throughlines of the season.” But she’s happy to add a TV veteran like Remar to the cast: “He and Clark, who are such an unlikely pair… they become the detectives of Season 2.”

Is Eddie’s faith being corrupted by the outside world? And can his marriage to Sarah be saved?

Even though he’s outside the walls of the Meyerist compound in Season 2, Goldberg says Eddie is still finding a way to hold onto his faith: “When we started to research people who leave [religions], a lot of people were like, ‘I still get on my prayer rug.’ So we wanted to keep a lot of that, because it’s hard to break those [habits].” We also saw Sarah break the rules and talk to Eddie, and Monaghan says Sarah is “completely conflicted” about severing ties with her estranged husband: “She’s desperately in love with this person… and she had no other choice but to let him go. You can really see the emotional struggle that she has. Clearly, these are two people that still love each other.” 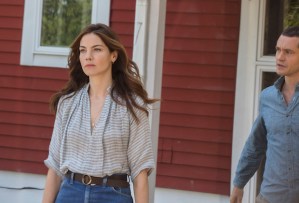 How do Sarah and Cal go forward as co-leaders after he confessed to killing Silas?

One of Season 1’s biggest secrets got dug up (literally) when Cal took Sarah into the woods and showed her Silas’ body, confessing to his murder. Dancy says Cal immediately regrets burdening Sarah with the horrible truth: “He’s like, ‘No, I don’t want you compromised. You’re meant to be the pure one! You’re my beacon!’ Once he’s told her, his world has got a lot more complicated.” Monaghan adds that Cal’s confession forces Sarah into survival mode: “When the veil has been lifted, it’s like a tectonic shift for her. I think she quickly realizes that in order to preserve this movement, and everything she’s ever known, she has to go with the program.”

But she also hints that Sarah and Cal do eventually find a way to work together: “Towards the tail end of this season… you really see them trust and listen to each other again. There’s a real profound intimacy that comes with a spiritual connection.”

Is Cal too erratic to lead this movement?

We’ve already seen Cal’s lack of impulse control this season, buying a building for way too much money and punching a guy at a fundraiser. Dancy says that Cal’s Season 2 flailing “is really the riptide of his actions in the first season, and his need to assuage that guilt. He’s basically trying to atone for that thing that’s lodged in his brain like an ice pick.” 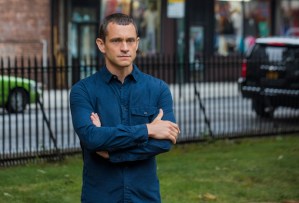 He admits that Cal “has got massive control issues, and… anger issues.” But he hints we’ll also learn a bit more about “what he stepped into, as a young, young boy, in terms of his relationship with Steve, and how maybe that’s also something he’s trying to hold together. There are a lot of reasons why Cal might crack at any moment.”

Eddie’s new relationship with Chloe: a real romance, or just an effort to connect with someone?

Eddie may still be pining for Sarah and his kids… but that didn’t stop him from indulging in a hot hook-up with his brother’s ex Chloe (Leven Rambin). So is this a one-time thing, or something more? “It’s a real romance that allows him to actually confront something with his brother that he hasn’t totally dealt with,” Goldberg explains. “And it’s also just a safe person to connect with.” So expect to see more of Rambin as Chloe in future episodes… and maybe to learn more about Eddie’s relationship with his late brother.

Speaking of Eddie and Sarah’s marriage: What was up with Sarah making out with that strange guy at the fundraiser?

Sarah was definitely out of character in Episode 2, ditching her drab earth-mother garb to get glammed up for a high-priced fundraiser — and getting hot and heavy with a stranger after a glass or two of Champagne. What was she thinking? “I think it’s a result of her just being really emotionally unstable,” Monaghan says. “And feeling really unhinged. And having a little bit too much to drink, allowing herself to get carried away.” But she says it was just “a momentary lapse of judgment” for Sarah — so don’t read too much into it, OK? 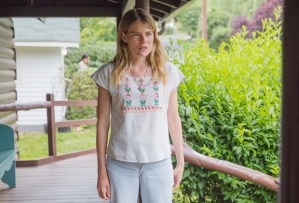 Is Mary’s pregnancy a ticking time bomb for Cal — and the movement?

“The short version of the answer to that is: yes,” Dancy says with a wry smile. In the premiere, we see Mary pregnant and glowing with her husband Sean… but we also know it’s very possible that baby is Cal’s, after her illicit tryst with him in the Season 1 finale. And Goldberg hints that Mary takes full advantage of that possibility in the episodes to come: “She uses it. She becomes very aware of her power. She becomes our Lady Macbeth.”

Was Hawk really levitating? Or was he just stoned out of his mind?

Season 2’s second episode closed with a supernatural sight: Eddie’s teen son Hawk seemingly levitating in the air during an overnight spiritual retreat. And like many things on The Path, we may never know the real truth on this one. “In the next episode, Eddie’s going to say to [Hawk], ‘You hadn’t eaten for 48 hours. You had been up all night. Of course you think you floated. You didn’t float,'” Goldberg teases. “But I think that is the mystery of faith… We chose to show it, because we’re showing what he feels. That’s what you learn about a lot of these faiths: They do such extreme exercises that the feeling is elation. It feels like God.”

What did you think of The Path‘s Season 2 premiere? Grade it in the poll below, then hit the comments to share your thoughts.