After three seasons of sexy supernatural chicanery, Salem on Wednesday wrapped up its run, leaving in its wake not only a conclusion that was as surprising as it was satisfying but also the corpses of more than half a dozen major characters. Who got a happy ending, and who was merely… ended? Read on and find out! Or, if you’ve already seen the episode, grade it in the poll below!

Cancelled or Not? 13 Shows on the Bubble

‘EVEN HELL WILL NOT HIDE YOU NOW’ | As “Black Sunday” began, the devil — newly reunited with Little John’s body — ordered Anne to bring Cotton to the Sibley mansion, and reminded Mary that, in mere minutes, it would be midnight and, thus, their wedding day. (All together now: Ew!) Meanwhile, Sebastian engaged in the unfairest of fights with John, countering his rival’s bravado with sorcery. But, just when Sebastian was selecting which of John’s organs to bring back as a mean-spirited souvenir for Mary, Alden miraculously managed to fatally wound his opponent. With his dying breath, Sebastian expressed his remorse at having plotted the destruction of Mary, the only woman either he or John would ever love, and sent him off to save her. Which was all very nice, but, er, how? Naturally, Sebastian croaked before he could answer.

‘YOU RUIN EVERYTHING!’ | Cornered in the Knockers Hole brothel by a mob of Isaac fans, Hathorne persuaded Mercy — my beloved Mercy! — to release their captive in order to save their necks. Alas, even Isaac wasn’t able to calm the crowd. After sending Dorcas running to safety, he watched in horror as the locals trashed their own homes. And they were just getting warmed up! Back at the Sibley place, the devil and Anne explained to Cotton that all of Salem — including his precious Gloriana — could be spared if only he’d forfeit his soul and enter hell of his own free will. Consider it done, he more or less replied, adding, “I prefer this” to being married to Anne. (Snap!) Once Cotton had crossed the threshold of hell, the devil started coming apart at the seams. The reason wasn’t Tituba’s so-so sewing, though — the body of a full-grown and wickedly handsome man was busting out of the boy’s skin! 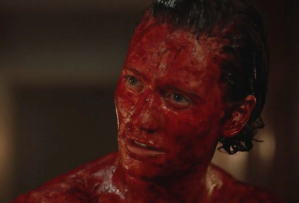 ‘LOOK WHAT A GREAT SACRIFICE MAY BRING’ | “Ta-da!” the now-grown-up devil’s expression said when he was done emerging from his flesh cocoon. (Who could blame him?) The no-longer-Little John then proceeded to pat himself on the back for all of his expert plotting and entice Mary to embrace her role as his queen of the night. “We will birth a race of gods and monsters,” he said. No thanks, his mom replied. Birthing one monster was quite enough for her. Still, she submitted to a bloody kiss, at which point he instructed Anne to deliver his fiancée to the altar — in other words, his bed. En route, Mary pleaded with Anne to “spare [her] having to consort with that thing,” and whad’ya know? Anne complied, slashing at her and letting her blood spill onto the Countess Marburg. Next thing we know, Anne was putting a weakened Mary to bed and assuring her that, when she awakened, she’d “feel like a new woman.”

‘A FOOL KNOWS A FOOLISH PATH’ | Later, John stole into the house, found Mary and was in the process of carrying her away when, suddenly, she bit off his earlobe and knocked him out! The Countess Marburg now inhabited Mary’s body! Informed by Anne that Sebastian was a goner, the devoted mother replied, “Pity. Then again, he always was the weak one.” Off that, the Countess dove into bed with the devil. At the same time, we learned through a series of flashbacks and cutaways what Anne’s endgame was. (Who knew she even had a game, much less an end one?) In Knockers Hole, she froze the peasants’ “orgy of self-destruction” just long enough to promise Isaac that she’d end it for good if only he’d team up with her. When he refused, she unfroze the crowd, into which he was dragged (presumably) to his doom.

‘I INTEND TO BE THE LAST WITCH’ | In another vignette, Tituba swore to Anne that she’d go away and never be heard from again. Which was, in a way, exactly what Anne had planned for the seer. Only Anne’s plan also involved taking away Tituba’s power of vision, erasing her mouth (!) and shipping her off on a slave ship! (Da-amn!) In the brothel, Anne magically hanged Hathorne and wondered aloud where Mercy’s old ambition had gone. When Mercy insisted that all she wanted was to be with her husband, Anne magically hanged her, too! (Ack! Not my Mercy!) As for John and Mary… Since he’d once saved Anne’s life, she was giving him a pass — one time only. He was to take Mary — who’d been left as desiccated as the Countess had been — and hit the road, leaving behind one single item: his angel-killing dagger!

‘I CAN TASTE YOUR DESTINY’ | Joining her mother in bed with the devil, Anne used her ultra-powerful weapon to do away with Big John. After all she’d done to help him, why? he understandably wanted to know. “Power,” she replied. “I’ve discovered mine.” But he needn’t worry — she’d bring him back in time so that she, not Mary, could be his mortal bride. Hell, she was already pregnant with the baby who’d become his new host! Delighted, the devil thought maybe this time he could have a happy childhood. The Countess, on the other hand, was livid. “I should have drowned you in my womb,” she spat at her daughter before realizing that, oh dear, her goose was cooked. “What was it you told me?” Anne asked as the Countess drew her last breath. “We all murder our parents.”

‘WE HAVE BEEN RULED BY WITCHES ALL ALONG’ | As the episode — and, with it, the series — drew to a close, the Countess’ demise restored Mary to her full vigor once again. Translation: Her porcelain skin grew back, good as new. So she and John set off to enjoy their happily ever after and the fact that they both had flesh. Back in Salem, Anne — now the colony’s Grand Poobah — speechified to the masses, among them Dorcas, that all the recent deaths were merely “birth pangs of our brave new world,” one in which they’d have to be super-mega-vigilant against witches. Finally, Cotton… poor, poor Cotton. He was last seen getting his first glimpse of hell, which was depicted in a manner that was as fantastic as it was classical!

So, what did you think of Salem’s swan song? Grade it in the poll below, then hit the comments to back up that grade with your critique.