There’s an intense battle brewing on Supergirl — and not between the Girl of Steel and any archenemies, but among many of the CW series’ fans, who seem to be approaching the well-teased Kara/Mon-El romance from two extremes: Love it, or hate it.

Coming off of Monday’s midseason premiere, in which Mon-El revealed his wish to become a hero like his Kryptonian BFF, TVLine’s Matt Webb Mitovich, Andy Swift and Vlada Gelman debated the pairing’s pros and cons.

MATT | I hereby convene this gathering of the TVLine Debate Club to discuss the merits of Supergirl’s Kara and Mon-El (of Daxam!) as a romantic pairing. I’ll kick things off with a pithy, “Great Caesar’s ghost, I am not buying these two as budding lovebirds.”

ANDY | I think the problem is that phrase “budding,” which I’ll admit to using myself on occasion. If we’re speaking botanically, I’d say their romantic relationship has been planted and is being watered — but we’re all getting ahead of ourselves. I’m cool with a slow burn.

VLADA | As a rom-com sucker, I find Kara and Mon-El’s scenes absolutely delightful. But from the minute Mon-El was introduced, it was so obvious where the writers were heading with these two that I understand why some viewers have been put off by the romance, 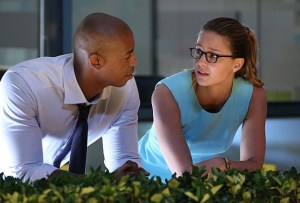 especially in light of Kara and James’ abrupt end.

MATT | I’m glad you brought up Kara and James, because while the show never seemed to go “all in” on that pairing, there was a maturity to it. I felt like Kara, who in so many ways is this extraordinary woman, was being drawn to a man. Mon-El’s relative boyishness draws out her lighter side, sure, but it steers them more in the direction of a “teen” romance. But maybe she needs that to offset the incredible weight of the world on her strong shoulders…?

ANDY | You hit the nail on the head in terms of the maturity of the relationship, but to be honest, that’s exactly why I’m enjoying the lighter vibe we’re getting from this pairing. Alex and Maggie are giving me all the “adult” relationship I need from this show, leaving Kara and Mon-El to deliver the “teen” vibes I still enjoy. Maybe we’ll find out he’s not the guy for her down the line — they’re being compared to Romeo and Juliet, and we all know how well things turned out for those two — but for now, I’m enjoying my visit to, as Kevin Smith puts it, “Charm City.”

VLADA | I think it’s also important to note that Kara brings out a better side of Mon-El. The characters can grow and evolve together. Kara and James’ would-be relationship always felt somewhat stagnant to me — once they get together, what’s the conflict? — and maybe that’s why it eventually stalled. And if Kara and Mon-El aren’t meant to be, then at least we’ll (hopefully) get a really great, emotional storyline out of their Romeo and Juliet-esque romance. 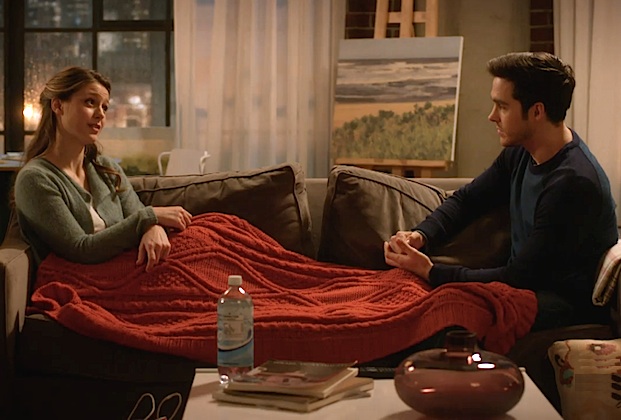 MATT | To your point, Vlada, I do like that Kara brings out a better side of Mon-El — the bro we saw shtupping Miss Tessmacher! in the file room was obviously being played for laughs, but his casual morality set him up as a most peculiar fit for do-right Kara. I’m not feeling the “Romeo and Juliet” thing you two keep citing — interplanetary rivalry via hearsay doesn’t carry as much heft as Shakespeare — but I suppose I will make one last effort to see Kara and Mon-El as something, anything, more than sibling-like ETs. All that said, a final Q: Will they ever get together? If romance is the show’s plan, getting a proper kiss by the season finale is looking a bit ambitious.

ANDY | I don’t think a proper kiss is too far off, since we’ve already gotten an improper one. But I’ll admit to one thing: I’m leaving this conversation less sold on their relationship than I was when I entered. I remain firm on the actors’ chemistry — and I think Mon-El is Kara’s best current romantic option — but I do feel like we’re being told that they’re falling for each other more than we’re actually seeing it on-screen. (There, you broke me. Are you happy now?!)

VLADA | Next Monday is only Episode 10! There’s still plenty of time for a proper kiss. Andy, I think we need to see more of Kara’s feelings for Mon-El if the writers want us to believe in them as a couple someday. It’s obvious he’s smitten, but I’m not so sure about her. But you have not broken me! I remain made of steel in my stance that Kara and Mon-El are a delightful pairing with lots of potential.