Riverdale — The CW’s dark, sexy Archie adaptation — is leaving the fierce female rivalry between Betty and Veronica on the comic-book page.

“We don’t want to pit these women against each other,” Lili Reinhart, who plays Betty, said during TVLine’s visit to the show’s Vancouver set last November. “That was important to us. We didn’t want to make it seem like these women had nothing better to do than fight over a man — especially one who, in the comics, picks one [girl] one day and the other the next. We’re definitely not falling into that.”

As a result, Betty and Veronica are “a lot closer” in the CW series – debuting Thursday, Jan. 26 at 9/8c – than in the source material, Camila Mendes (Veronica) says. In fact, you might even call them – gasp! – pals. “Whatever rivalry happens, it’s going to happen because of Archie, but it’s never really going to get in the way of the essence of their friendship.” 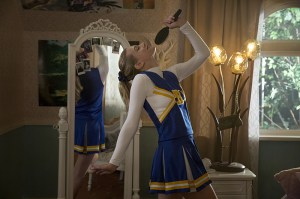 As much as Veronica is intrigued by Archie, she is also drawn to the sweet, stifled girl next door. “I think [Veronica] sees all this potential in [Betty] that is being pushed down because of her mother,” Mendes shares. “Her mother really has a negative effect on her life. Veronica recognizes that and is trying to bring all… the strength in Betty out so that the world can see it.”

But the infamous love triangle isn’t gone; it’s just morphing into another shape altogether. When Riverdale opens, Archie is hooking up with his music teacher Miss Grundy – and she won’t be the only female to catch the ginger guy’s eye.

“Archie ends up having a girlfriend who is not Betty or Veronica, which also causes some conflict” between the trio, leading man K.J. Apa (Archie) previews.

Adds Mendes: “That’s part of what makes Archie Archie is that he wants everyone. It’s not even just Betty and Veronica. He wants Cheryl [Blossom], he wants whatever. Any girl that comes his way that gives him any slight bit of attention, he’s going to want to receive it.”