Donald Trump kicked off his presidency Friday with a fiery populist inaugural address, vowing to return the nation’s power to the American people.

Outside Washington D.C.’s Capitol Building, Trump took the oath of office to become the 45th President of the United States, with the oath administered by Supreme Court Chief Justice John Roberts. He then addressed the nation for the first time as President, calling his new administration “a great national effort to rebuild our country and restore its promise for all of our people… We will face challenges. We will confront hardships. But we will get the job done.”

Trump railed against the Washington establishment and promised “we are transferring power from Washington D.C. and giving it back to you, the people.” He complained that in years past, “politicians prospered, but the jobs left, and factories closed… That all changes, starting right here, and right now. This moment is your moment. It belongs to you. This is your country.”

He declared that today, his inauguration day, “will be remembered as the day the people became the rulers of this nation again. The forgotten men and women of our country will be forgotten no longer.” 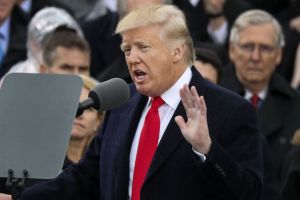 Trump painted a bleak picture of “American carnage” under the previous administration, with “rusted-out factories scattered like tombstones across the landscape of our nation” and the “sad depletion of our military.” But he dismissed all that as the past: “Now we are looking only to the future.”

He said he plans to seek “friendship and goodwill” with foreign governments, but he also had a stern message for leaders all over the world: “From this day forward, it’s going to be only America first.” He also called upon all American citizens to come together after a contentious campaign: “When America is united, America is totally unstoppable.”

He did strike a conciliatory note, saying that “when you open your heart to patriotism, there is no room for prejudice.” And he said all races are united by love of country: “Whether we are black or brown or white, we all bleed the same red blood of patriots.” Trump closed with his usual campaign motto: “We will make America great again.”

An estimated 900,000 people attended Trump’s swearing-in ceremony and inaugural address on Friday, but more than 50 Democratic members of Congress chose not to attend as a form of protest against Trump’s conservative agenda. Outgoing president Barack Obama and his wife Michelle did attend the ceremony, along with former presidents Bill Clinton, George W. Bush and Jimmy Carter and Trump’s campaign opponent Hillary Clinton.