Your tear ducts won’t be getting a break anytime soon, This Is Us fans.

The cast and creator of NBC’s breakout hit drama offered a sneak peek of next week’s episode (Tuesday, 9/8c) at the Television Critics Association winter press tour on Wednesday. In the clip, Kate (Chrissy Metz) goes to a drum-therapy class, which stirs up intense memories of a major family event we haven’t seen yet: her dad Jack’s funeral.

Creator Dan Fogelman told reporters that “next week’s episode is a big episode. There’s a before and after to this family. Before Jack, and after. That’ll be really interesting… to show where that hinge was.” As for the details of Jack’s death, “you’ll learn when… and then, much later, how,” Fogelman teases.

This Is Us was just renewed for two more seasons by NBC, for a minimum of 36 more episodes. So how many more twists does Fogelman have in store for us? “We have a lot,” he promises. “Our theme is, life will surprise you a little bit.” He says he’s already written out the whole history of this family, so none of the twists are a surprise to him or the writers: “What’s surprising for the audience is the order in which we choose to tell the story… We know where this series is going, and how we’re gonna keep people on their toes.”

How many seasons can this show run, beyond the three already ordered? Fogelman declined to put a number on it, but says, “I know where the show goes. I have a number of seasons in my brain, and we’ll see as we get there… The great thing about this show is, with the nature of the timeline, we’ll never run out of stories.”

More highlights from Wednesday’s This Is Us press tour panel:

* Trying to explain why the show’s been so successful, Milo Ventimiglia (Jack) says: “I had one woman tell me that the work we’re doing was important. That’s one of the things that impacted me the most… I think it’s filling a void, particularly in a television landscape that does get cynical, that does get dark, that does get riddled with zombies. It’s more hopeful.”

* Regarding the show’s plentiful acting monologues, Fogelman said, “To not do it would be like having a Ferrari in your garage and only driving it 25 miles per hour on city streets. We have these actors, and each one of them can alternate between comedy and these powerhouse dramatic monologues… It removes all the bells and whistles. You’re just letting great actors act.” 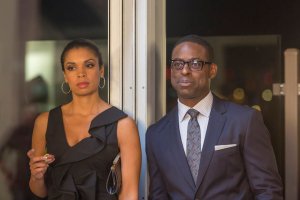 * Sterling K. Brown (Randall) and Susan Kelechi Watson (Beth) addressed their characters’ picture-perfect marriage. (“People will say ‘Relationship goals’ on Twitter,” Brown laughed.) Brown and Watson actually went to graduate acting school together at NYU, so that history helped them build a believable marriage. “We’ve known each other for a while, and had a similar approach to the work,” Brown said. “You can’t force something in front of the camera that you don’t have behind the camera.”

* Mandy Moore (Rebecca) said the makeup process that turns her into older Rebecca has gotten easier: “We’ve gotten the time down quite a bit. It’s now like three and a half hours, as opposed to five, initially. You just get real Zen about it.” But she has no complaints: “This is the best job I’ve ever had. How many jobs do you get to play the same character from 27 to 66? I will put on the prosthetic makeup as long as Dan wants to write for it.”

* What does Fogelman credit for the 70 million views that the This Is Us trailer piled up on YouTube? “Milo’s ass, first of all,” he jokes. “We estimate 55 to 62 million views, just from that.” Chris Sullivan (Toby) even had an alternate title for the show: “This Is Ass.”