Already the home of ruthless Vikings, the History channel this Wednesday zeroed in on a different kind of warrior, with its action-drama SIX. Will you continue along with their mission?

In the series premiere, members of the titular Navy SEAL Team are continuing their covert mission to hunt down and eliminate Muttaqi, a bin Laden-like Taliban leader in Afghanistan. Perhaps no one is more obsessed with their target than team leader Richard “Rip” Taggart (Justified‘s Walton Goggins) — so much so that when they come across a U.S. citizen collaborating with the terrorists, immediately after laying witness to more of Muttaqi’s carnage, Rip guns down the Detroiter in cold blood.

Flash forward two years, and Rip is inexplicably no longer a part of the team, having gone to seed/drink and joined up with a private military contractor. In that new role, he is helping secure a school for girls in Nigeria when the Islamic extremist group Boko Haram storms the place to rape and pillage. Back home, Rip’s SEAL Team Six colleagues — Joe “Bear” Graves (Revenge‘s Barry Sloan), Alex Caulder (Copper‘s Kyle Schmid) and Ricky “Buddha” Ortiz (Agents of S.H.I.E.L.D.‘s Juan Pablo Raba) — soon get wind of Boko Haram’s assault 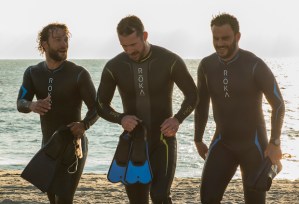 on the school, discovering that their former leader is among the captured.

As Joe, Alex and Buddha juggle the initiation of new SEAL Robert Chase (Chicago Fire‘s Edwin Hodge), they must put their differences aside (including: Why did Rip really quit?) to locate and rescue their former leader, ideally before his captors learn of his true value. Oh, and as an added “ticking clock”: the brother of the U.S. citizen Rip killed in cold blood wants revenge, and is employing his own considerable resources to get to the former SEAL.

In addition to the military action, SIX‘s personal runners include Joe and his wife Lena’s (Hollywood Heights‘ Brianne Davis) ongoing attempts to conceive a child; Caulder juggling his devil-may-care lifestyle with his reputation as a deadbeat dad; and Buddha’s potential exit from the Navy to, like Rip, go private — as a means to placate wife Jackie (Nadine Velazquez) and provide for their daughter’s elite dance school.

Was SIX a 10 for you? Grade the first of the eight episodes below.