“We’re going to pull from the entire canon of the comics,” executive producer Patrick Schumacker said at the Television Critics Association winter press tour on Wednesday. “We want to show as much of the breadth of the DC universe as possible. You’re going to see characters you’re familiar with if you are a big, hardcore comic book fan.” 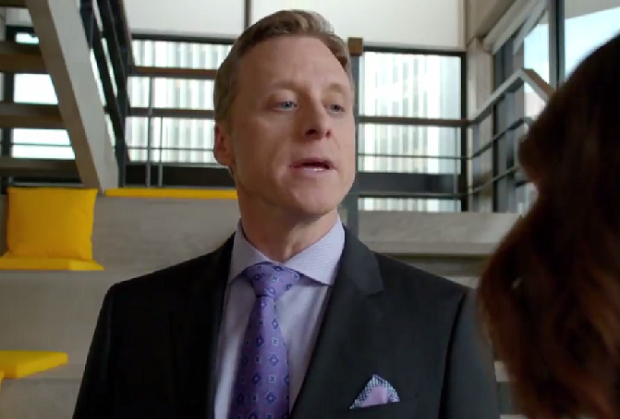 In Powerless — debuting Thursday, Feb. 2 at 8:30/7:30c — Batman’s cousin Van Wayne (played by Firefly vet Alan Tudyk) runs Wayne Security, and the Caped Crusader gets quite a few references. EP Justin Halpern is “open” to the idea of featuring more relatives of iconic heroes and villains, but “we’re conscious of not name-dropping to name-drop,” he added. “We want it to make sense when it happens.”

A few characters might be altogether off-limits for the NBC comedy. “We have trouble showing people that already exist in the world,” Halpern admitted. Another obstacle: “When you ask for something that’s in the Berlanti-verse [stable of shows], there’s a lot of red tape. It’s on a different network.”

Powerless is set in its own universe, Earth-P, and doesn’t treat the DC films “as things that’ve happened within this world,” Halpern noted. Explained Schumacker: “Batman v Superman and Man of Steel are the cinematic universe. The Berlanti-verse is its own thing. And Earth-P is its own thing. And they all exist within the multiverse of DC,” but separately.

However, that won’t stop the show from having a laugh at the expense of its super serious cinematic counterparts. “We have a joke in the pilot where we poke fun at the Batman v Superman film,” Halpern shared. “It’s always going up to [the DC Comics brass] and being like, ‘Hey, can we s—t on this?’ and usually they have a good sense of humor about it.” 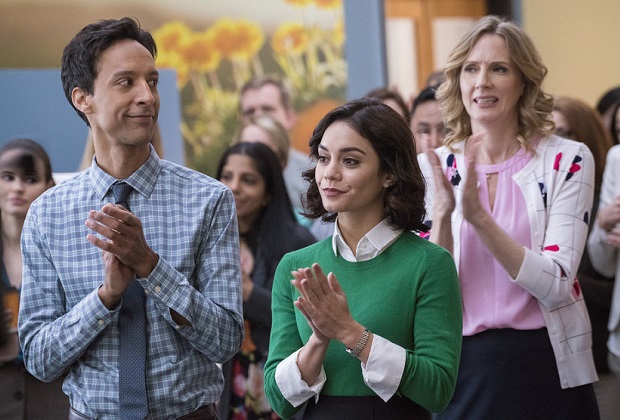 As for the NBC comedy’s tweaked premise — originally, Vanessa Hudgens and Danny Pudi’s characters worked at an insurance company — the change came about when that “angle was not really generating the type of storylines that we wanted to tell,” Schumacker explained. After a sit-down with Warner Bros. TV and DC Comics CCO Geoff Johns, “we landed on security products, because we still wanted to do the idea that they’re working on stuff that makes everybody a little bit safer… After we had hit the security angle, we sat down with NBC, and they were the ones that suggested R&D. We loved it. It immediately generated stories.”

Tudyk’s character also received an upgrade to Batman’s cousin as part of the retooling. “The Wayne of it all, it came about because, obviously, there’s a lot of recognition in the Wayne name,” Schumacker shared. “It is ultimately Bruce Wayne’s company. It’s a subsidiary of Wayne Industries.”