Big Three, you can take the week off.

Tuesday’s all-flashback episode of This Is Us went back to the beginning to show us the day leading up to the birth of Jack and Rebecca’s kids. And not just what happened to Jack and Rebecca on that day, but also their kindly ob-gyn Dr. K and Joe, the fireman who found baby Randall abandoned at the fire station.

So why go all the way back to the pilot midway through the season? This Is Us creator Dan Fogelman told reporters at a press screening that he thought it’d be interesting to “now go back to this thing that’s intrinsic in people’s bones who care about the show, and not just do a prequel, but catch up to the pilot halfway through. Because all of a sudden, you look at it differently. It wasn’t just [Jack] turning the lemons into lemonade; it was Dr. K taking his own advice and changing his life.” 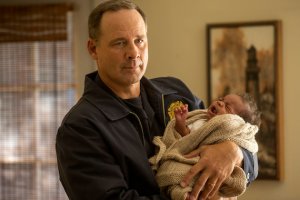 He also wanted to fill in the backstory for firefighter Joe, and show that he actually contemplated taking Randall in as his own, he says. “I thought that it would be interesting to find a somewhat religious man who thought the sliding door of his life was Randall, and it wasn’t. Randall was meant for Jack and Rebecca. And there’s a religious undertone to that. Even though it wasn’t for him, what Randall did was open up a window for him and his wife again.”

Plus, the fireman subplot just reinforces the show’s theme that “we’re all living in this big, giant collective thing,” Fogelman says. “When you step back and look at the big picture, the fabric of our lives… people come in and out, and then you could go off and follow them, if we needed to, for an entire season.” So will we see more of Brian Oblak as Joe this season? Fogelman laughs: “I’m excited people are asking about that. Maybe. It’s just so great, because I don’t think he’s had roles that have more than a couple lines in his career as a working actor… And then I saw the first cut of it, and I was like, ‘This guy is excellent!'” 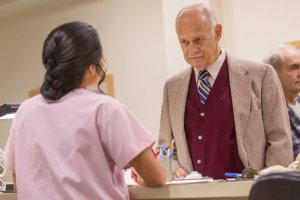 One character we might see more of this season: a younger version of Gerald McRaney’s Dr. K. Fogelman asked reporters, “Would you guys be interested in going back and meeting a different actor: Dr. K, at twenty years old? I think it would be a really, really interesting thing.” (We do, too!) Fogelman also teased that “in a future episode, you see [Jack and Rebecca] getting married. You see Miguel being the best man at the wedding.”

This Is Us is already notorious for making viewers cry — and this week’s episode, with Rebecca’s speech to her unborn kids and Dr. K’s struggle to move on from his wife’s death, was no exception. So does Fogelman ever cry when he watches his own show? “Very rarely,” he says, but he does admit to one moment this week getting to him. “I caught something rising in me at the very, very end of this episode, where you go back into the Super 8 footage of [Rebecca], and she’s reaching her hand for him, and she and [Jack] share that look. It’s so life-affirming to me. It’s not always the sad stuff. It’s the little moments.”

Tell us in the comments, This Is Us fans: Do you want to see more of Joe the fireman character? How about a twenty-year-old Dr. K?