As part of TVLine’s midseason preview spectacular, Agents of S.H.I.E.L.D.’s Jason O’Mara said we would be learning about the origin of Director Mace’s powers— to which some said, “Well, duh, he’s an Inhuman.”

This Tuesday’s episode of the ABC drama, though, indeed shed light on Jeffrey’s backstory, and exactly how it is (and isn’t) that he “powers” up.

The first big clue comes at a public ceremony where Director Mace is formally welcoming Daisy aka Quake back into S.H.I.E.L.D.’s ranks, and giving her due credit for all those times it was believed she was causing, not resolving, problems. Amid receiving awkard hugs from survivors’ families, Daisy notices in the nick of time a sniper taking aim at the stage. Mace hurls a podium peppered with explosive bullets safely into the sky, before being ushered away by his right hand man Burrows, who totes around a conspicuous briefcase.

Whisked away to a Quinjet, per emergency protocol, Mace is alarmed when the side of the vessel is blown open mid-flight, and Burrows tumbles out, briefcase in hand. After crash landing with Coulson and Mack, Mace makes clear that Priority 1 is finding Burrows. Soon enough, the gents track down Burrows, just as he is about to be executed by some Hydra castoffs, the hand with which he holds the briefcase lopped off. Coulson and Mack coordinate an assault, assuming that Mace can more than hold his own. The Director, though, makes a mad dash after grabbing the briefcase, only to see its contents shattered by a baddie’s bullets after he unlocks it. Mace also takes a bullet to the bum before Coulson and Mack save the rest of his average bacon, and then discover that he is not Inhuman after all, but gets his powers from a super-serum.

Simultaneous with Coulson and Mack’s discovery, Simmons also gets the 411 on the Director, courtesy of General Talbot, who explains that the Patriot juice was derived from that which gave Daisy’s father his own powers (minus all the “bad” stuff, that is). Talbot says the dictate was to appoint an Inhuman to S.H.I.E.L.D.’s top spot, but when none qualified, they created one of their own.

After he and Mack fend off another wave of goons — with a big assist from Daisy and LMD May — Coulson also learns from Mace the actual nature of his big “hero” moment, how he was actually snapped tripping on top of a woman, not shielding her with his body. Mace is poised to resign as Director, but Coulson counters that S.H.I.E.L.D. needs an “Inhuman” face, to best oppose Senator Nadeer and her Watchdogs. From here on, however, Coulson is calling the shots on all missions. 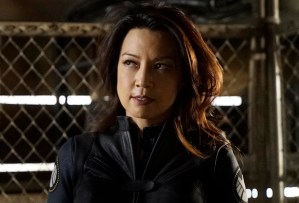 * Radcliffe worried to Aida 2 that, with him banned from the base for now, LMD May could be discovered. And as a matter of fact, coming off the aforementioned rescue mission, LMD May is now hiding a nasty gash on her shoulder blade that reveals her android endoskeleton. The real May, meanwhile, has a violent reaction to the “spa day” existence her mind was tricked into, because, Radcliffe surmises, May thrives more from conflict and adrenaline versus tranquility. (Now you can say, “Well, duh.”)

* Jemma and Fitz debated some more about him keeping the Aida secret — especially when he suggested they could benefit from powering up the android’s severed head and study it. Jemma nixes the notion, but as seen in one of the final moments, Fitz is forging “a-head” in secret, having downloaded Aida’s data banks into his handheld.

What did you think of the episode “The Patriot”?