When not gasping “Oh my God! Oh my God!” as The Haves and the Have Nots’ Katheryn chased frenemy Veronica around her mansion with a kitchen knife during Tuesday’s episode, I had two thoughts: 1. The OWN drama is flippin’ awesome, and 2. not nearly enough critics acknowledge that fact.

As a fan of the series — created, EP’d, written and directed by Tyler Perry — I find the lack of props as bewildering as it is irritating. Maybe I’d understand if I’d seen any of the Madea movies? Regardless, can’t we look beyond the auteur’s sillier fare and judge HAHN on its own merits? We certainly should.

No, it doesn’t draw Empire-sized ratings. (HAHN’s recent Season 4 premiere scored 3 million viewers, or about 40 percent of the audience for the Fox smash’s fall finale.) However, HAHN has done what neither the Dallas reboot nor Revenge did: It has resurrected the primetime soap. (OWN’s lineup now includes Greenleaf, Queen Sugar and Perry’s If Loving You Is Wrong, and his Too Close to Home just kicked off its second season on TLC.)

Moreover, the show isn’t just campy, crazy-lady-on-a-rampage fun. Yes, it regularly delivers moments that will make you shriek at your television. (For instance, Veronica being stabbed by her vengeful son in the breast implant!) Yet Perry’s writing — here as sharp as the blade with which Katheryn nicked her treacherous pal — doesn’t merely go for shocks, it tackles issues of class, morality and sexuality with thrilling and at times brutal candor.

Pacing can be an issue, sure. Dialogue is occasionally repeated often enough that a viewer might think it’s Groundhog Day. But Perry makes up for it by proving over and over again that there’s no “there” to which he is afraid to go. Case in point: Though monstrous Veronica hired a thug to beat the gay out of her son, Jeffrey is now engaged in a twisted affair with a married cop who sexually harassed him! (Oh, and engaged to a woman that he “accidentally” impregnated!) 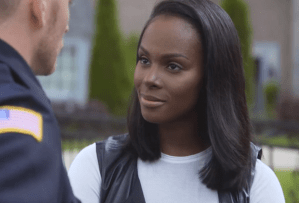 And some of HAHN’s characters are absolute gems. Besides Angela Robinson’s formidable Veronica, a Mommie Dearest that you never want to call a “simple bitch,” there’s John Schneider’s Jim, a family man as unscrupulous and unfaithful as J.R. Ewing ever was, Crystal R. Fox’s fierce, righteous Hanna and Tika Sumpter’s modern-day Sammy Jo Carrington, Candace, the mercenary daughter that — so help her, Lord — Hanna may be a little too eager to judge.

In short, HAHN is a guilty pleasure that’s actually so good, you don’t have to feel guilty about it. It’s so good that you wish it were a daily soap. And it’s absolutely so good that it makes you wonder, why the hell isn’t it getting the respect that it deserves?

What do you think? Fellow HAHN fans, hit the comments with your theories. Is it a Madea thing? Non-fans, have you sampled the show lately… or ever? If not, why not?