For Scorpion‘s Katharine McPhee, getting Lea Thompson for a TV mom almost seemed to be her density.

“I was at a good friend’s wedding where I met Zoey Deutch (Switched at Birth, Ringer), and I knew that Lea was her mom. We kind of hung out, and three months later Lea comes on my show,” McPhee recounts for TVLine. “I was like, ‘I met your daughter before!’ And then I found out Lea lives not too far from me.”

The Back to the Future icon’s November debut as Veronica Dineen — great grifter, mediocre mom — marked the latest wrinkle in what McPhee affectionately calls “Paige’s Whiny Season.” As the actress/singer notes, “Paige has been really frustrated with Walter, she’s really frustrated when her Mom gets in…. 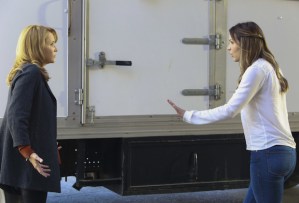 You get to really see a more agitated side of her.”

With regards to Veronica — who in tonight’s episode (CBS, 10/9c) uses her particular set of skills to help Team Scorpion with a counterfeit money crisis that could collapse the U.S. economy — McPhee notes, “For Paige’s whole life, her mom has been on the run. All Paige ever wanted was to have a stable mother, and once she comes back, all she ever does is cause problems.”

That said, upcoming events could pave the way for a reconciliation. Of sorts. “Paige goes through a process of really struggling with getting closer to her mother. But by the end [of Thompson’s current run] there’s a really sweet bond that gets created between the two of them, one that sort of mends some of the past.”

Speaking of unresolved matters, we had to relay to McPhee a reader’s question, about whether Walter (played by Elyes Gabel) will remember the “I love you” he let slip with during his “outer space” hallucination. 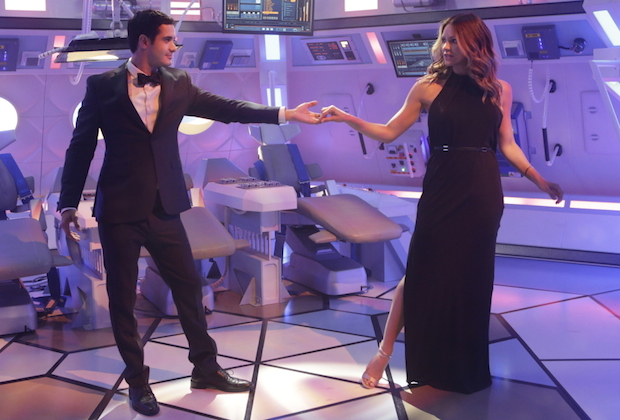 “We still have quite a few more episodes to shoot. And thus far, there have been little things he has remembered, but they sort of stopped revisiting that,” she answers. “I know they’ll go back to it, though.”

Walter’s ILY of course came in the midst of the caper drama’s latest romantic triangle, one which McPhee notes was innovatively more about the dynamic between the two fellas, Walter and former Homeland agent Tim Armstrong, than Paige’s relationship with either of them.

“I liked it, because the writers are really clever about bringing in new characters and utilizing them for a specific amount of time and getting what we need out of them. Without feeling too contrived,” she says. “I think Scott [Porter, as Tim] did an amazing job playing the conflict. Because really, there was more conflict between the two of them. Paige was part of the triangle, but it was really more about her frustration with how Walter behaved. She was more of an observer, seeing Walter in a different light — and being disappointed.”

Between matters of a mother and the assorted romantic entanglements, plus the ever-endearing dynamic with son Ralph, McPhee could not be more pleased with Paige’s evolution over two-and-a-half seasons, and counting. In fact, has she ever cued up the series pilot, 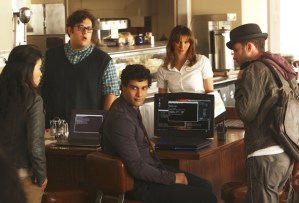 “It’s funny you ask that, because I’ve been wanting to go back and watch it,” she says. “Elyes and I were talking about it the other day, how it’s really a different show than the pilot was. We’ve still got the great drama, and the action, but the characters have become more comic book-like. Sylvester and Toby and Happy…. this whole different element has happened, and I really like it.”

Paige herself hasn’t gotten “comic book-y,” McPhee observes, but instead has acquired fun new traits of her own. “The pilot was a bit more serious — Paige had less opportunity to have little kooky moments — but she gets to have quirky moments now, which is really nice.”

Want more scoop on Scorpion, or for any other show? Email insideline@tvline.com and your question may be answered via Matt’s Inside Line.