Fox’s Lucifer resumed Season 2 with an episode all about self-worth — spurred on in part by a staggering parade of the title character’s lovers from just the past eight weeks.

But hey, I’m just a writer, not the slut police.

Setting things in motion was the interruption of Lucifer and Chloe’s moment-over-burgers by Jana, a stewardess anxious for rack up more miles with, apparently, the world’s most super-satisfying lover. (Pays to know everyone’s desires, eh!) After an irked Chloe excuses herself from the near-kiss and leaves, Lucifer informs Jana their tryst has been grounded. But the next day, Jana turns up dead.

Worse for Lucifer, Jana’s colleague, Raj — whom Lucifer also once bedded — is killed, pointing to a pattern. That is when Chloe suggests they interview all of Lucifer’s recent lovers, teeing up the aforementioned assembly of beautiful people, female and male. And as hilarious as 1) their tales of unprecedented satisfaction, 2) by what means, 3) how they make Chloe blush and 4) how they impress Dan are, Lucifer’s swagger is stymied by his realization that it was “just sex” for each and every one of his conquests, that none felt any emotional intimacy — and certainly not the kind that spurs a guy to surprise you with burgers and fries, Chloe selfishly deduces.

As they proceed to investigate the case — attempting to use “sexy stewardess” Maze to draw out the drug dealer who was using Jana as a mule — Chloe gets one kind of advice from Charlotte, who (for her own reasons) asserts that Lucifer is better for being with her, and deserves someone as worthy as the detective, while Lucifer himself 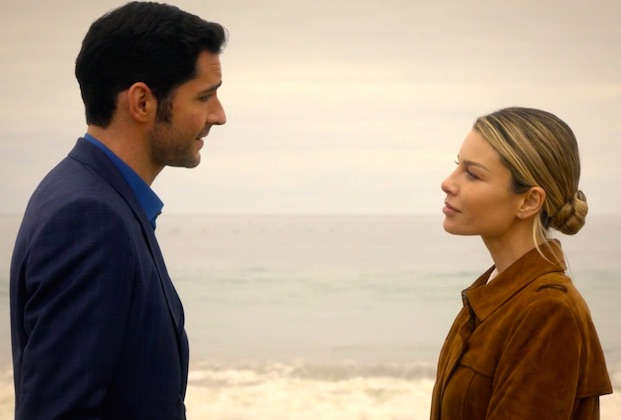 eventually tells Chloe that he will be seeking no more “moments” for them, having deemed himself subpar.

“You deserve someone better, because you are selfless,” he concedes. “You’re special, but I’m not worth it.” To which Chloe responds, “Yeah, you’re probably right…,” before going in for the first kiss that dodged them in the cold open. Detective!

* Also speaking to the theme of self-worth, Maze — when not steering Trixie away from a balanced breakfast — sought a consult from Dr. Linda (during the shrink’s lunch break!), after Chloe didn’t seem to appreciate that John Decker’s killer, Perry Smith, had met his maker (more or less at her and Dan’s hand). There, Dr. Linda said that self-worth “comes from within,” that Maze needs to declare herself “awesome” and not have someone else say it.

* Charlotte seemed poised to tell Lucifer about Chloe’s “miracle baby” origin, but instead simple sang the detective’s praises, then urged her son to prove himself to his worthy partner. Amenadiel, despite having some initial reservations about pushing Lucifer and Chloe together to further his and Mom’s “home” agenda, similarly suggested to his brother that he is underestimating himself when it comes to Chloe.

* How hilarious was Suki, the Luci-stalker with a Carrie Mathison-like wall of clues??

* During the sting operation with Dan, Maze blurted out into everyone’s comms that he bedded Charlotte — astounding Chloe and grossing out Lucifer.

* The penultimate scene of this episode officially kicked off a three-episode procedural arc, as the douchey guy who actually was in possession of the package Burt sought delivered it to a mysterious man. Inside the box, it turns out, are vials of something — and douchey Andy was fretting he got some of it on him, and thus wasn’t feeling so good. The man in the hat and trench coat proceeds to choke Andy to death, then walk away with the vials….

What did you think of Lucifer‘s midseason return?