Penning an open letter to Wikileaks founder Julian Assange, Lorre asked the notorious hacker to set his sights on taking down the president-elect.

“Belated congrats on your whole Mr. Robot thing,” Lorre began. “You promised to use the Internet to expose and bring down all the corrupt bastards ruining our world, and boy did you almost follow through. Julie baby! Boychick! The job’s only half-way done!”

What followed was Lorre’s plea for Assange to “step up,” and to show the world that he’s not just “another gun for hire” by leaking incriminating information on Trump.

“You need to show us you’re not just another gun for hire and hose down the other mosh pit. You know what I’m talking about,” Lorre wrote, before detailing some of the many things he believes Assange could gain access to. “The tax returns, the outtakes, maybe even some freaky-deaky-golden-leaky beauty pageant video action. Time to step up, J-man. If you wanna be a cyber Fidel, or a digital Che, or a virtual Ho, you’ve gotta stop stuffing your face with arroz con pollo and get to work. It’s time to go all Talking Heads on this situation.”

In closing, Lorre told Assange he was “one wikiwacky-leak away from being a hero. Or maybe a martyr. Ecuadorean potato soup, Ecuadorian puhtahto soup, they’re usually the same thing.”

Lorre signed off with the cheeky salutation “Hugs to Vlad, Chuck,” before complimenting (?) the hacktivist on his unique style. 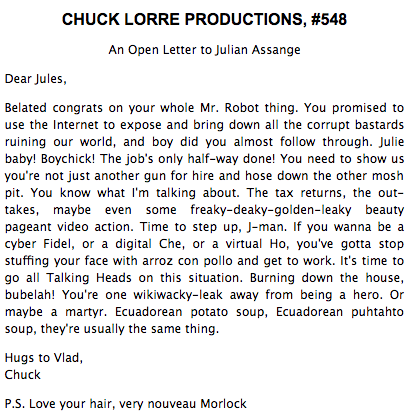 What did you think of Chuck Lorre’s open letter to Julian Assange? Is the TV producer in any position to request that the Wikileaks founder pursue Trump?