Ever want to travel back to colonial times? On Making History, all you have to do is… hop into an old gym bag, apparently.

Fox’s new time-travel comedy — premiering Sunday, March 5 at 8:30/7:30c — stars Happy Endings alum Adam Pally as a slacker who has a magical duffel bag that allows him to travel through time. (His father was a brilliant physicist, you see.) He ends up in Lexington, right before the American Revolution, and uses modern-day song lyrics (and giant hunks of ham) to charm a colonial girl played by Gossip Girl‘s Leighton Meester.

So why a duffel bag, of all things? As creator Julius Sharpe explained at the Television Critics Association winter press tour on Wednesday, it was just simpler than a more traditional time machine: “I didn’t want to have to spend all my time at work working with this big orb. It was just like, ‘What would be the easiest thing, production-wise?'” 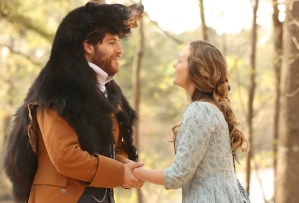 The duffel bag isn’t always the easiest thing for the actors to climb into, though. Co-star John Gemberling (Broad City), who plays founding father John Hancock, told reporters that fellow cast member Neil Casey (Inside Amy Schumer) “split his pants several times squatting to get in.” Pally concedes that to fit, “sometimes you do have to ’69’ it. Head-to-toe it.”

And they’re not just confined to colonial times. Pally hints that the magical duffel bag gives the characters “the luxury of traveling all across time. So we go to 1919 Chicago. We go to the ’90s. We go to 1940s Germany.” The only limitation is that wherever you are in the world when you time-travel, that’s where you end up in the new time period. But Pally says the characters can always fly the duffel bag to a new destination: “You can check it, right? You can go a lot of places with it.”

Time-travel stories come with a lot of heavy implications about changing the course of history, but Making History tries to avoid all that. (As EP Seth Cohen puts it, “these people quickly realize that they’re not up to the task of fixing everything bad that’s ever happened.”) Instead, Sharpe says the show is more of a romantic comedy about Pally and Meester’s characters, and “how two people who see the world differently can get together.”

So are the cast and producers concerned at all that there are so many other time-travel shows on TV right now? Sharpe isn’t worried about it: “I don’t view it as being in competition with them. This is a comedy.” But the time-travel glut did give co-star Yassir Lester (Girls) an idea for a future episode: “We go back a year to kidnap the casts of Timeless and Time After Time. So we’re the only thing.”