Let’s cut to the chase: The Young Pope is one of the strangest TV shows I’ve seen in years.

You may have seen the trailers for HBO’s new limited series (debuting this Sunday at 9/8c), starring Jude Law as a bad-ass, cigarette-smoking Pope, and thought to yourself, “Well, that looks odd.” But even those trailers cannot prepare you for the sheer, unadulterated weirdness of creator/director Paolo Sorrentino’s boldly grandiose vision.

Sorrentino is an Oscar-winning Italian film director (The Great Beauty, Youth), and HBO has given him nearly free rein here; he directs and writes, or co-writes, all ten episodes. So it makes sense that at times, The Young Pope feels more like an eccentric foreign film than a TV series. Except it is a TV series — and little quirks that might seem charming in a 90-minute movie can begin to grate across several episodes. 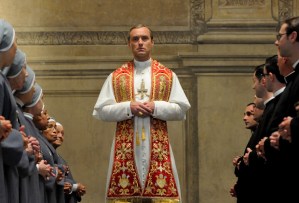 Law stars as Lenny, a fictional American archbishop who’s suddenly, and unexpectedly, elected to be the new head of the Catholic Church. Now Pope Pius XIII, he brings a shockingly modern sensibility to the musty old Vatican. (When offered breakfast, he demands a Cherry Coke Zero instead.) He’s a bit arrogant, too: When an assistant informs him that Pope John Paul II forbade smoking inside the Vatican, Lenny lights up anyway, saying, “There’s a new Pope now.” He carries himself like a newly installed mob boss, throwing his weight around to show his underlings who’s in charge.

Side note: Is Jude Law any good in this role? It’s hard to say, because his character is so hard to pin down. Lenny is deeply pious and brutally unforgiving of anyone whose faith isn’t as pure as his. But he’s also got a boyish charm, and enjoys seeing the look of horror on people’s faces as he steamrolls over centuries of church tradition. Ultimately, he’s kind of impenetrable as a character, which makes it difficult to latch on to him — or Law’s performance. 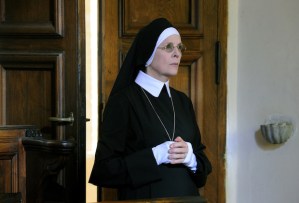 Not trusting of the Vatican establishment, Lenny brings in Sister Mary (Diane Keaton), an American nun who raised him as an orphan, to be his closest advisor. And he’s probably right not to trust them, since many of the cardinals surrounding him — including the scheming Voiello (Silvio Orlando) — resent Lenny’s quick ascension, labeling him a “telegenic puppet.” In a way, The Young Pope is kind of like ABC’s Designated Survivor: An unprepared man finds himself thrust into a position of immense power, while everyone around him plots to manipulate and undermine him.

But in another way, it’s like nothing else on TV. There’s a conventional drama in here somewhere about power, faith and corruption, but The Young Pope always seems to zig when you expect it to zag. Sorrentino’s scripts are spiked with surreal dream sequences, random flashes of nudity and a strangely juvenile sense of humor. (Sister Mary sleeps in a T-shirt that says, “I’m a Virgin, But This Is an Old Shirt.”) I almost wish the show would just let loose and go full camp, so we could all arrange Sharknado-like viewing parties and take a drink anytime the Pope says something outrageous.

Even as is, though, there are (strange) pleasures to be found here. The series is impeccably shot, and Lenny’s troubled upbringing and fiery devotion to God raise real questions about the nature of faith — questions we don’t often see asked on TV. If you can find a way to accept The Young Pope‘s more bizarre flourishes, it’s a strangely hypnotic viewing experience. Still, the fact that Lenny is the absolute ruler drains the show of any real dramatic tension. If no one can tell him no, where’s the conflict?

Fittingly, a strange show like The Young Pope has a strange airing schedule: It’ll air twice a week, Sundays and Mondays, for five weeks, for a total of ten episodes. That has the feel of an old-fashioned network miniseries, which works in the show’s favor, considering Sorrentino’s cinematic flair. So since it’s only here a short while, instead of focusing on the (many) parts that don’t work, maybe we should celebrate The Young Pope for at least trying something different. In this era of Peak TV and risk-averse network fare, can we ask for anything more?

THE TVLINE BOTTOM LINE: Though it’s too flawed to recommend, The Young Pope is certainly unique, with surreal flourishes and a touch of the absurd.