Are you holding your breath waiting for Hannibal to come back? Well, don’t… or you might end up as dead as one of Dr. Lecter’s victims.

TVLine caught up with Hugh Dancy at the Television Critics Association winter press tour, and we couldn’t resist asking him about the possibility of another season of the exquisite serial-killer drama, which ended its NBC run in 2015. And while Dancy says “I believe that everyone is willing” to do more Hannibal, he doesn’t see it happening anytime soon.

“My feeling is that, knock on wood, if it came around again, it wouldn’t be a bad thing for it to be four or five years later,” he says. “That might actually be kind of interesting. How weird would that be, on a personal level, to find yourself back with those people? ‘So… where did we leave off?'”

Of course, that kind of break might be a necessity, with Dancy currently starring on Hulu’s The Path, and co-star Mads Mikkelsen and showrunner Bryan Fuller also busy with other projects. But Dancy sees a possible multi-year break as a positive: “It’s such a strange idea, but it’s potentially very healthy for a story like that. So we’ll see.” 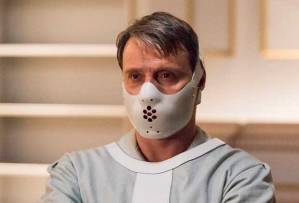 Dancy says he still speaks with Fuller, and there isn’t “anything concrete” to report yet about a new season of Hannibal. But he does confirm what Fuller’s been saying: that a Hannibal continuation could be based on The Silence of the Lambs. “I know where we stood at the end of Season 3, in terms of what he was thinking about,” Dancy tells us. “And it did reflect some elements of Silence of the Lambs… He loves that source material, as he would tell you.”

There’s one big problem with this plan, though: As written, Dancy’s Hannibal character, FBI profiler Will Graham, doesn’t have much of a role in Silence. (He’s only mentioned in passing, with FBI agent Clarice Starling taking center stage.) But Dancy says that Fuller “envisioned taking some elements of that novel and reworking it through the Will-Hannibal relationship… I think it would be more through the filter of Bryan.”

So don’t lose hope, Fannibals: We might still see more of Hannibal and Will… just probably not for a good, long while.