The 74th annual Golden Globes ceremony wasn’t Sunday’s only television event with a touching tribute to the late Carrie Fisher.

Fox’s Family Guy, which aired during the Globes’ second hour, opened its winter premiere with a dedication to Fisher, who died in December after suffering a sudden heart attack on a flight from London to Los Angeles: 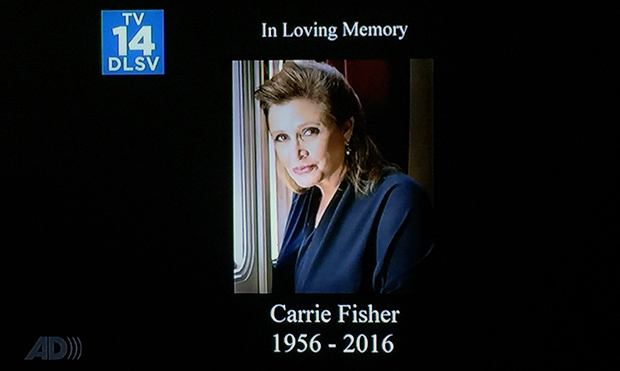 Fisher provided the voice of Family Guy‘s Angela, Peter’s supervisor at the Pawtucket Brewery. Angela is set to appear in more episodes this season, both of which she recorded before her death. (Fisher will also appear as mother-from-hell Mia on Amazon’s Catastrophe.)

When news of Fisher’s passing first broke, Family Guy star/creator Seth MacFarlane tweeted his fond memories of working with her:

Carrie Fisher was smart, funny, talented, surprising, and always a hell of a fun time to be around. Family Guy will miss her immensely.

Your thoughts on Family Guy‘s simple nod to “Angela”? Drop ’em in a comment below.