In the name of keeping things fresh, Hulu’s The Handmaid’s Tale will veer only a bit from  the Margaret Atwood novel — though one distinct deviation has already drawn notice.

In the acclaimed 1985 novel, there is a white supremacist element to the Republic of Gilead, the theocratic military dictatorship that in a near-future has stripped women of many rights (reading included) and forced many to serve as handmaids — vessels through which society can procreate, after pollution has decimated fertility rates. Minorities, though, women included, were sent away to “homelands” in the Midwest.

In the Hulu series, however, Samira Wiley (Orange Is the New Black) plays Moira, a handmaid.

Asked about that deviation from the novel, executive producer Bruce Miller tells TVLine it was “a huge discussion with Margaret Atwood, and in some ways it is ‘TV vs. book’ thing.” After all, on the printed page, “It’s easy to say ‘they sent off all the people of color,’ but seeing it all the time on a TV show is harder.

“Also, honestly,” he adds, “what’s the difference between making a TV show about racists and making a racist TV show? Why would we be covering [the story of handmaid Offred, played by Mad Men‘s Elisabeth Moss], rather than telling the story of the people of color who got sent off to Nebraska?”

Also supporting the decision to have black handmaids, “The evangelical movement has gotten a lot more integrated” in the decades since the book was published, Miller notes. But perhaps the biggest driver behind the change — the one that made sense, story-wise — is the fact that given the setting’s dire birth rates, “I made the decision that fertility trumped everything,” the EP shares. 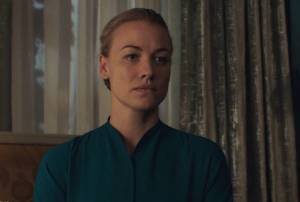 casting Serena Joy younger with Chuck alum Yvonne Strahovski — was done to put her in “direct competition” with Offred, who is trying to give Serena and her commander husband a child, Miller explained.

All told, Miller said during the series’ panel at the Television Critics Association winter press tour, it wasn’t so much about “tweaking” the source material but “adapting it for television,” where “the story is continuing” — ideally for many seasons, he hopes.

“We’re certainly loyal to the book, so any changes we make are mindful of the fact,” Miller asserted. Nor have any changes been made simply to “surprise” those who know where the story is going. “[We’re not] playing those kinds of games with the audience. We’re just trying to tell this story well.”