The next best thing to a frozen-yogurt stand on every corner: a chance to sit down with the cast and creator of NBC’s heavenly freshman comedy The Good Place (Thursdays, 8:30/7:30c).

Stars Kristen Bell (Eleanor), William Jackson Harper (Chidi), Jameela Jamil (Tahani), D’Arcy Carden (Janet) and Manny Jacinto (Jason) and creator Michael Schur met with reporters on Friday during the Television Critics Association winter press tour. And they chatted about how the show ended up on network TV, the new romance that popped up in this week’s episode… and how Bell’s most famous TV character might react to her current one. (Let’s just say they wouldn’t be besties.)

Here, the highlights from The Good Place‘s press panel:

* With its unique high-concept premise, The Good Place has been shrouded in secrecy from the start… and even the actors are sometimes left in the dark. When Carden auditioned to play virtual assistant Janet, the role was described to her as “a very efficient customer-service agent who could rattle off statistics and stuff very quickly… at a doll factory,” Schur says. Then when her casting was announced, Schur didn’t want to give anything away, so he told the press that Janet was “a violin salesman with a checkered past,” Carden remembers. 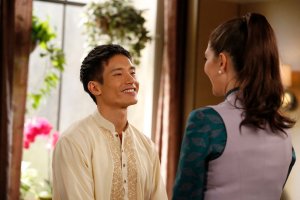 * Janet also got a new love interest this week, in aspiring DJ Jason (formerly known as Buddhist monk Jianyu). A dim-witted dude and an all-knowing supercomputer might seem like an odd match, but Schur says her recent rebooting helped: “About 18 seconds after she’s rebooted, she and Jason will be at the exact same intelligence level.” Carden was all for the new plotline, she says: “I was, like, ‘I get to kiss Manny?’ Yeah, I was, like, very into it. Maybe too into it.”

* Since it’s so ambitious and serialized, why is The Good Place on a network like NBC, rather than cable or streaming? Schur — a veteran of SNL, The Office and Parks and Recreation — says, “I have been working at NBC continuously since January of 1998… and I don’t see a reason to necessarily just junk it.” But he adds that the time restrictions of network TV are a blessing in disguise: “I’ve watched certain shows on certain streaming services where I thought, ‘Man, give me two hours with an editor, and I will knock 15 minutes out of this sucker, and it’ll probably be better’… If I’m cutting things I like, it means that everything that’s in is something I liked even more.”

* Bell is still probably best known for playing the titular teen sleuth on Veronica Mars… but would Mars get along with Eleanor? Bell is quick to say no: “I think Ron Mars would call some high-class bulls–t on Eleanor… Veronica Mars roots for the underdog and thinks of other people, and maybe that’s not Eleanor.” Bell also remembers, before she signed on, asking Schur exactly how bad of a person Eleanor is: “If I can find a justification for her actions on earth, then I can play her and make you sympathize with her. Is she, like, shooting rodents with a pellet gun? Like, I just can’t bounce back from that. I didn’t want her to have any, like, screws loose.”

* People get into the Good Place based on the sum total of their actions on earth, and Schur sometimes wishes that were true… like when he sees motorists open their car door and spit on the street. “It’s such a weird invasion of basic decency,” he says. “I wish that, like, a little negative-18 in red just floated up over that guy’s head.” Jamil adds that the show’s ethical concerns have made her more conscious of her own moral decisions: “I have genuinely stopped killing all moths because of this show. I used to murder them without thinking twice.”