We’ve got questions, and you’ve (maybe) got answers! With another week of TV gone by, we’re lobbing queries left and right about shows including Sherlock, Brooklyn Nine-Nine, NCIS and Nashville!

1 | Regarding the first four episodes of The OA: Couldn’t imprisoned Prairie have used a balled shirt, her knee… anything… to block the current/keep the envelope from floating off? Was no one wondering why they came back from their experiments wet? And who was regularly trimming Homer’s hair over the years?

2 | Would Mariah Carey have been better to simply, calmly walk off stage amid the New Year’s Rockin’ Eve tech snafus? And does cohost Fergie come across as “a Maya Rudolph impression of Fergie,” with the calculated voguing and swagger?

3 | Would Sherlock really be able to do any damage by punching someone underwater? And does John really think he’ll get away with cheating on Mary when his partner is Sherlock Freakin’ Holmes? 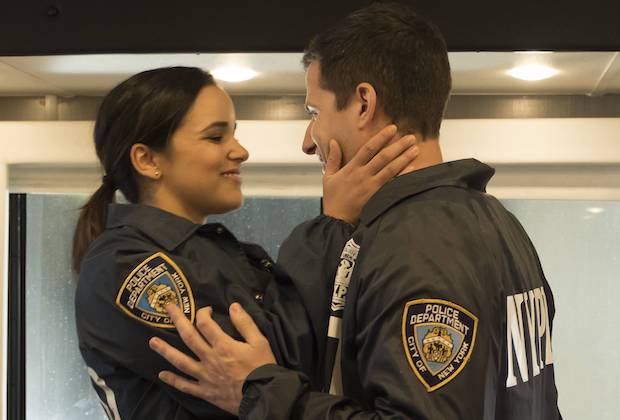 4 | Brooklyn Nine-Nine fans, considering how well Jake and Amy’s relationship is going, don’t you wish the producers would show us a little more of it?

5 | Wouldn’t The Mick‘s kids be waaaay better off with the maid Alba taking care of them, instead of Mickey? Is Mickey’s sister just that bad of a mom that she doesn’t realize that (or care)?

6 | Can a person host The Celebrity Apprentice and have natural-looking hair? Discuss.

7 | Does The Wall fill the Plinko-loving hole in your primetime-viewing heart? Or does it nag you that, when all is said and done, the couple’s haul is almost happenstance?

8 | Was The Bachelor‘s Alexis endearing or obnoxious when she kept insisting her shark costume was actually a dolphin?

9 | Any NCIS fans surprised by how strongly affected you were by this week’s unexpected  death?

10 | Did this week’s Bull alter your perception of driverless cars, in either direction? Also, wasn’t that a bit dangerous of a game Bull and Cable played with the near-crash? What if her wifi crapped out?

11 | Are you already rooting for Chicago Fire‘s Severide and Anna to become a couple?

12 | On Sweet/Vicious, how did no one in that little record store overhear Jules’ confrontation with her rapist, Nate?

13 | When did Modern Family‘s Jay and Gloria get a stand-up attic? (Remember Phil famously crawling around to fix the router/printer in Season 2?)

14 | Ellie Kemper might not be the best Match Game player, but wasn’t Caroline Rhea a little too mean to her about it? And what do you think Ice-T’s pixelated answer was for “It’s Raining ___”? (Actually, don’t guess; our commenting system’s language filter might break.)

16 | On Lethal Weapon, wasn’t it a bit disturbing that Riggs’ decision-making capabilities while high on that designer drug weren’t much different than usual?

17 | Given his devilish superpowers, shouldn’t Salem‘s Little John have put up more of a — or at least some — fight when he was strung up by Mary?

18 | Was Lifetime’s Witches of East End more of a Charmed reboot than the description for The CW’s potential Charmed series?

19 | Did Nashville‘s Will and new admirer Jakob (Looking‘s Murray Bartlett) generate more heat with their 10-second near-kiss than Will and Kevin have in two seasons of on-again, off-again couplehood? When Zach giggled at Rayna asking how he got her cell number, was it tech-boy exuberance or I’m-your-stalker creepiness? And was Highway 65’s new hire so obviously an inappropriate fanboy that he must be a red herring?

20 | Did Big Bang Theory‘s flashback-themed outing — which shed further light on Sheldon’s Texas childhood — quietly plant some additional seeds for the in-the-works Sheldon-centric prequel series? Like, the spinoff kind of has to show us his train-set collection, right?