NBC commenced its journey to Emerald City on Friday night, with the first two hours of its 10-episode riff on The Wizard of Oz. Will you stay by Dorothy’s side for the remainder of the trek?

Emerald City stars Adria Arjona (True Detective) as Dorothy, a Kansas nurse who as a newborn was dropped on the Gales’ doorstep, and on her 20th birthday decides to reach out her birth mother. In doing so, though, Dorothy finds a murdered cop inside her birth mom’s trailer home, while the woman herself (Leverage‘s Gina Bellman) is discovered inside a nearby root cellar, gravely wounded. Rushing outside for help, Dorothy is confronted by a second police officer — just before a nasty twister lifts him away. Dorothy promptly ducks into his patrol car, alongside his K-9, as it also gets whisked away.

The car crash-lands in a snowy plain, where it plows into a woman draped in red. Soon after, Dorothy is discovered by the Mundjekin (sp?) people, who bring her and her dog (“toto” in their language) to Ojo, leader of the Tribal Freelands. Believing Dorothy to be a witch — seeing as she seemingly killed the “merciful and stern” Mistress of the Eastern Woods, and only a witch can kill a witch — a vote is taken, and the young woman is exiled. Ojo leads Dorothy through the Prison of the Abject, which the Witch of the East created (and whose magic-practicing prisoners include Ojo’s wife), and then to a brick road, yellowed by poppy pollen, 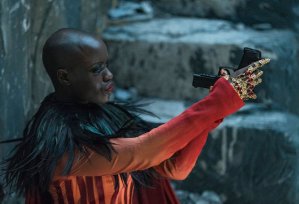 that will take her to Emerald City. Its powerful Wizard might be able to get her home.

Passing through the recently torched village of Nimbo, Dorothy finds a man (Oliver Jackson-Cohen) strung up on a cross. She helps him down, tends to his wounds and (begrudgingly, since she has “permanence” issues) names the amnesiac Lucas, after her hometown. As it turns out, the Witch of the East was not killed, which Dorothy and Lucas discover when she traps them in the Prison of the Abject. They are only able to free themselves when Dorothy tricks the curious crone into using her pistol — while it is pointed at her own head. Afterward, a pair of jeweled gauntlets that the witch had worn “transfer” onto Dorothy’s hands.

Meanwhile, in the Emerald City…. Word reaches that the Mistress of the Eastern Woods is truly and sincerely dead. The Wizard (Vincent D’Onofrio) takes recent events (sky-ripping tornado included, as recorded by monkey-shaped drones) to signal that The Beast Forever, a mighty entity which previously has come in the form of flood and fire, is making its return. He thus sends the Wizard’s Guard, led by Eamonn, to track East’s killer. As they suss out the situation in the Tribal Freelands, one of Eamonn’s colleagues plots to off him, only to find himself chopped to bits by “lions.”

The elegant Mother North aka Glinda (Joely Richardson) arrives in Emerald City looking to give East a funeral in the witches’ temple, which the Wizard has kept sealed ever since Mother South was felled by The Beast Forever, after which he banished magic. Reunited with the Mistress of the Western Field (Ana Ularu) after 20 years, Glinda worries that her opium addict sister isn’t up to fulfilling her role in the ritual — which would make East the “last cardinal witch” and the two of them “nothing” — and yet West wields a “perfect” tongue during her “singing.” As a result, West is able to ingest East’s glowy “essence” (or something), which North later has her vomit back into a jar. The next day, the Wizard gladly bids North adieu.

Over on the brick road, Dorothy realizes that Lucas’ wound needs proper care, so she seeks out a healer — and is led to Mombi, a frightful woman who is keeping a young boy, Tip, prisoner, claiming that she must “protect” him by treating his “bad blood” with regular doses of “medicine.” Mombi is hesitant to help Dorothy, until she sees that Lucas apparently was a member of the Wizard’s Guard. Lucas, though, has no memory of his past — perhaps, Mombi suggests, because the Guard’s treacherous acts were so “unthinkable”? Wary of Lucas and already suspecting Dorothy a witch, Mombi tries to poison the former, but Dorothy saves him with charcoal. Dorothy then stages a late-night “breakout” for Tip, during which Lucas saves Dorothy by running Mombi through with his guardsman’s sword.

Tip escapes during the melee and ventures deep into the woods with his friend Jack. Tip worries about how he will fare without his regular “medicine,” only to realize at the end of the two-hour premiere exactly what it was that Mombi was “treating” — emerging from behind a tree with lush locks, Tip is really a young girl.

What did you think of Emerald City‘s opening hours?